Tucked away among the thousands of artifacts in the collections of two San Antonio museums are a handful of items from the 1918 flu pandemic that illustrate how living through a pandemic is much the same 102 years later, with face mask debates, stay-at-home orders, school and business closures and […]

Tucked away among the thousands of artifacts in the collections of two San Antonio museums are a handful of items from the 1918 flu pandemic that illustrate how living through a pandemic is much the same 102 years later, with face mask debates, stay-at-home orders, school and business closures and the wait for a vaccine.

Curators and collection managers at the Witte Museum and the U.S. Army Medical Department Museum at Joint Base San Antonio-Fort Sam Houston have preserved nurses’ uniforms, liberty bonds and military orders, among other things. Unfortunately, the Witte items are not on the display and the Army medical museum is currently closed to the public, but curators shared information about the treasures. 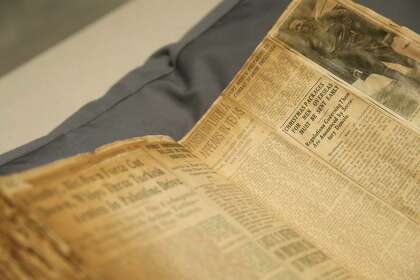 The most distinctive and informative artifact of the bunch may be a late World War I-era scrapbook of carefully clipped newspaper articles kept by young San Antonio stenographer Angie Senette in a repurposed ledger. It was donated to the Witte by her family after her death.

Little is know about Senette, who later took her husband’s last name of Gillette. In 1918, she was single and living with her sister on the near West Side. In the beginning of the scrapbook, much of the focus is on World War I, but gradually, more and more articles pop up dealing with a lethal flu and its impact on the city. Some sound familiar.

“There are headlines about churches and places of worship. Should they close or not? What about schools? They were debating the same things that we have been talking about more than 100 years later,” said Amy Fulkerson, chief curator at the Witte. 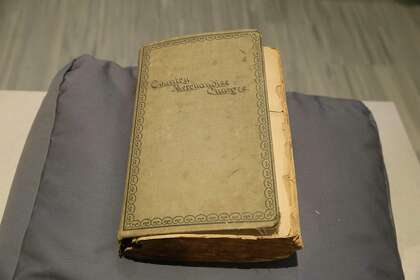 Marise McDermott, president and CEO of the museum, takes a message of hope from the scrapbook. “It puts the world into perspective. For me, I thought, people can survive. We can get through this. It’s going to be OK,” she said.

The first reference to the illness’ arrival in Texas is Sept. 25 in a story about patients in Williamson, Kaufman and Bosque counties.

“You have this young woman who is now interspersing these really heavy sort of articles about what’s going on in the war, because this is really the beginning of the end — these are the big battles of World War I — and all of the sudden, you start to see articles: ‘Serum to combat pneumonia is to be used by the Army.’ ‘The Mayo Clinic has developed the first pneumonia vaccine,’” Fulkerson said. 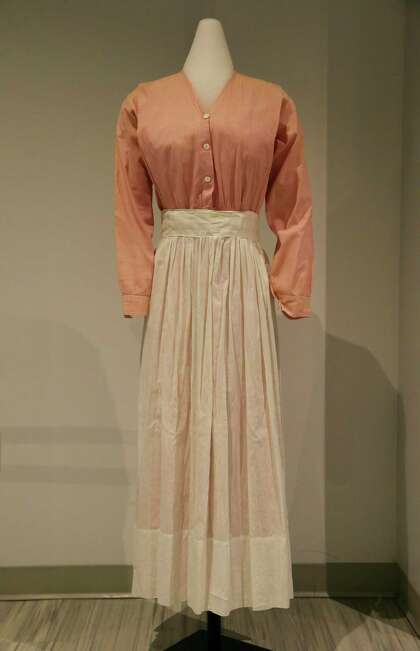 In a published poem clipped for the scrapbook, “The Quarantine Blues,” a soldier laments the curtailment of his romantic pursuits: “They won’t let us off to go down to the city / To flirt with the maidens so charming and pretty / No more can we wander down Alamo Plaza / Or kiss our fair ladies upon the piazza.”

Senette also saved a lot of stories calling on women to step forward to help care for the sick, as well as one about a military funeral held for a war widow who had answered that call and paid with her life after contracting the illness. There are requests for fresh eggs to feed sick soldiers, as well as for prayers. And there are stories about potential cures, too. 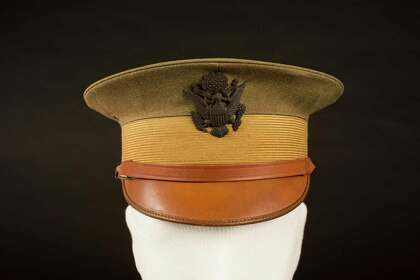 “There’s this feeling that everybody needs to do at least something and not feel hopeless in the face of an epidemic,” said Fulkerson. “And I think a lot of people felt like that at the beginning of COVID. We were in that learning curve just like they were. And I think this is one of those parallels. It’s not that the viruses themselves are parallels. It’s how we respond to this.”

According to the scrapbook, business and school shutdowns in 1918 didn’t last long. An Oct. 16 story notes the closure of public places; by Nov. 10, the curfew had been lifted and schools and theaters were set to reopen.

Then there was a burst of tremendously good news — the surrender of Germany. Celebrations followed, and them came a surge in cases not unlike those that have followed holiday weekends in 2020.

The last few stories the young woman kept include one noting “Opinions differ on advisability of use of masks” and, finally, a story dated Dec. 21, 1918, suggesting that bans put in place to protect people from the flu might soon be lifted.

The first official cases in San Antonio were diagnosed Sept. 30, 1918 at Camp Travis, an Army training facility adjacent to Fort Sam Houston, said George Wunderlich, director of the medical museum there. Among the artifacts that the museum has is a hospital gown from that time — a rarity, Wunderlich noted, given that gowns were typically used over and over until they fell apart and were thrown away.

And it has copies of orders issued by the Army about how to deal with outbreaks. Among other things, they called for facilities to be sealed off and for soldiers to keep their distance from one another. In the mess halls, screens were to be erected down the middle of the tables, similar to the Plexiglass barriers that are now commonplace.

Decades later, after Senette’s (then Gillette’s) death, a family friend reached out to the Witte and donated it.

Fulkerson says it’s been a good addition to the collection, and that’s one of the reasons the Witte already is collecting artifacts from this era, calling on San Antonians to share their stories.

“We don’t want to lose what is important — how do we deal with a situation that is infinitely more complex, because our choices are infinitely more complex? How do we reflect that and share that with the community 100 years from now?,” she said. “That’s what we want to be able to do for the people of San Antonio, to be that place that is the caretaker for those stories.”

So far, the museum has collected digital photographs as well as masks and an information sheet given out to patients after being tested.

The military museum has accepted a few current pandemic items, as well. Artifacts include handmade masks for nonclinical settings stitched by the loved ones of military personnel who went to New York to help out in hospitals there. The museum has a video, too, telling the stories behind the masks.

“One of the doctors said, this is my shield,” Wunderlich said. “Not the shield I’d use to protect myself, but like the one Wonder Woman uses to protect everybody else.”

Deborah Martin is an arts writer in the San Antonio and Bexar County area. To read more from Deborah, become a subscriber. [email protected] | Twitter: @DeborahMartinEN

Three books offer guidance on the art of drawing

Thu Sep 24 , 2020
A few books arrived the other day that are outside my regular zone of interest. They are how-to books from an ongoing series by British publisher the Quarto Group: “10-Step Drawing: People” by Justine Lecouffe and “10-Step Drawing: Nature” by Mary Woodbin, and “The Complete Urban Sketching Companion” from Quarry […] 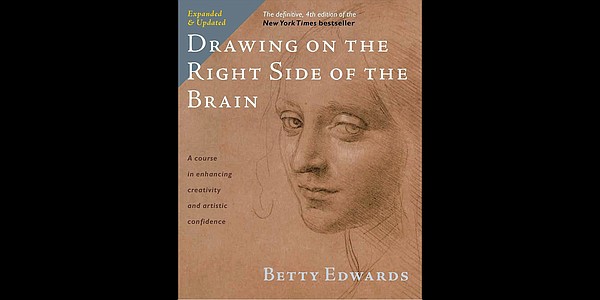