September 23, 2020 5:44 AM EST Check out some awesome behind-the-scenes images for Alien Isolation. Alien Isolation probably stands up there as one of my all-time favorite horror games. The sense of lingering fear was damning, the sound effects were haunting, and I loved the terrifying prospect of an alien emerging […]

Check out some awesome behind-the-scenes images for Alien Isolation.

Alien Isolation probably stands up there as one of my all-time favorite horror games. The sense of lingering fear was damning, the sound effects were haunting, and I loved the terrifying prospect of an alien emerging from the shadows, forcing me to cower under a desk. The game launched back in 2014, and I remember visiting EGX before it launched and trying it in a booth, surrounded by yelping games journalists. Pfft, cowards.

Well, yesterday Jon McKellan discovered an old Gmail account littered with a bunch of Alien Isolation gems from development. So if you’re a fan of production throwbacks, you’re going to enjoy the below thread.

Jon McKellan was, at the time the lead 2D & UI artist at The Creative Assembly, however, since then he has done a stint at Rockstar Games on Red Dead Redemption 2 as a Senior UI Designer and is now the founder of No Code Studio.

Straight up, Jon reveals some VHS-themed tests with a heavy 80s aesthetic for company indents that were designed to appear when booting the game up. He also shows off a shot of himself with other developers on the game at the EGX 2014 presentation. You can watch that very presentation at around the 29=minute mark here in which the studio talks about the development and plans for Alien Isolation.

Me, Byron and Al doing a presentation at EGX ‘14 – clearly I should have had a bottle of water too. pic.twitter.com/cPOorJFfoP

Another image uncovered from the depths of the forgotten Gmail account shows part of a script that looks to be the dialogue for a tutorial being recorded with a screen showing gameplay in action in the background. And then there’s a photo of some physical patch designs for the “Sevastopol” space station that the game takes place on. Jon reveals that the “AM/BM” initials that are present on the hangar crew patches are the initials and birthdays of his parents, and a way to honor his mother who had recently passed.

The first time a patch design of mine had become real. The AM/BM are my parents initials and birthdays. My mum had just passed away and this felt like a way to honour her that she would have been HYPED about 🙂 pic.twitter.com/25IkubnrYc

This image is nostalgic for me, as these are the exact booths that were at EGX. After going in I was able to try the game and survive in a level that featured the alien and the tracker device which really sold the overall expectations of the game. I still recall hearing one player in the same booth as I let out a scream. Jon also shares an image of a VHS tape of the film Alien (1979), of which he apparently mangled to get the VHS effects that are present in the game itself.

THE ACTUAL TAPE that I mangled to hell making the VHS effects for the game! She did well, but she is no more. RIP tape. pic.twitter.com/11DSxb6991

There’s also a Photoshop concept which acted as Jon’s pitch for the games cover art, and it certainly looks similar to the final design! And then there are some adverts for the game being displayed in GameSpot in the US.

Seeing ads in a gamespot in the US, my first time there, was surreal pic.twitter.com/sZPPAqUGhf

And if you’re interested in knowing what The Creative Assembly’s cabinet dedicated to Alien Isolation looks like, the image shows off a bunch of physical art, the game cases from the Xbox 360, PS3, PS4, and Xbox One. There’s also a cute little robot storage device figure and an IGN award for when the game was awarded the best of E3. There’s also the poster Jon created which become the official Nightmare/Novice poster.

Alt colour print I did of what became the nightmare/novice posters pic.twitter.com/zMk4zsCPJy

Here’s a taxi with an advert for the game on top, and then a large scale figure of the xenomorph at Seattle. The game also passed certification at some point in its life and Jon captured the moment, rather blurry as well. And that VHS tape above? You can see the setup used to nab the effects that were used in-game, and it looks as if he used an HDSLR to snap images or recordings of the tape in a broken state.

My set up for VHS fuckery pic.twitter.com/kBofI1B6rD

There’s another shot of the VHS setup, but also a shot of Kezia Burrows on set in full motion capture gear for the game.

Meeting the magnificent @KeziaBuzz on set on the first mocap shoots that I covered. We had a good laugh, and 6 years later we made Observation 💪 pic.twitter.com/8xvnf0IntI

Alien Isolation has been a game that still feels great to return to and post-launch it got some DLC. It is available on PC, PS4, Xbox One, and was even ported to the Nintendo Switch last year.

We asked some of the Inland Northwest’s creative types, “How are you getting your art fix during the pandemic?” | Fall Arts | Spokane | The Pacific Northwest Inlander

Thu Sep 24 , 2020
Art is something people look toward in times of both triumph and heartbreak. It might be a song that soothes a listener’s soul, a painting that centers a viewer’s mind, a poem, film or book that brings comfort or provides inspiration. During the COVID-19 pandemic, as we’ve found ourselves locked […] 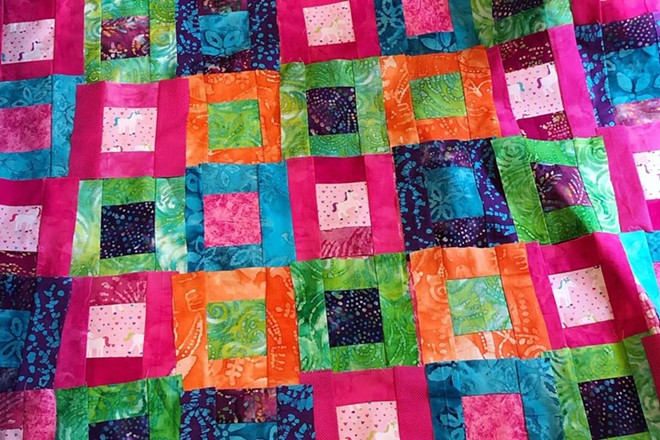