DUBAI — Art Jameel, an organization that supports heritage, education and the arts, announced Tuesday that Lebanese artist Nadim Choufi has been awarded Art Jameel Commissions: Digital. Choufi’s winning proposal embraces the theme of smart cities and the time cycles that govern its foundations.

Launched earlier this year, Art Jameel Commissions: Digital invited artists to submit proposals through an online Open Call which attracted nearly 200 project submissions; the winning work is to be launched and exhibited online for at least six months in early 2021. The commission also provides an opportunity for mentoring by technical experts from MIT’s Abdul Latif Jameel World Education Lab (J-WEL).

Responding to this year’s theme of ‘Time’, and thinking through how the concept of time has been challenged by technology and circumstance, the commission presented artists with an opportunity to rethink “digital art” and the ways in which it can question, investigate and form meaningful connections and experiences.

Choufi’s winning project, titled The Sky Oscillates Between Eternity and Its Immediate Consequences, digitally renders environments of a space colony on Earth, where two narrators attempt to unbound the perpetually promised possibilities in imagining the future and creating a space of multiple presents to question the clock running the planet through their lived experiences. The work will debut online and be accessible via Art Jameel’s websites.

Recognizing the diversity of ideas and exceptional quality of the proposals received, the jury opted to also award honourable mentions to two applicants: German-Iraqi Nora Al Badri, a multidisciplinary and conceptual media artist based in Berlin, and Lebanese duo Edwin Nasr and Bassem Saad.

Nasr and Saad’s Wound Contra Empire is an ongoing research project that examines the geopolitics of digital image-making by way of the US military-entertainment complex, the cosmotechnics of the so-called “axis of resistance,” and the reproducibility of ritual and trauma.

Art Jameel Commissions is an annual, multi-year program foundational to programming at Jameel Arts Centre, Dubai’s contemporary arts institution and a hub for exhibitions, educational and research initiatives. This year’s commissioning program’s digital focus simultaneously addresses Art Jameel’s long-standing commitment to a diverse, global public and current heightened realities of physical isolation. The next iteration of Art Jameel Commissions will centre on painting and drawing, with the Open Call taking place in 2021.

In addition to an artist’s fee of $7,500, plus a dedicated production budget for the project, Choufi will also receive curatorial support, both during the production process and launch, and technical mentorship and support in collaboration with MIT J-WEL. The work will enter into the Art Jameel Collection. — SG

Check out the demo for Bonfire Peaks, a beautiful upcoming voxel-art puzzle game 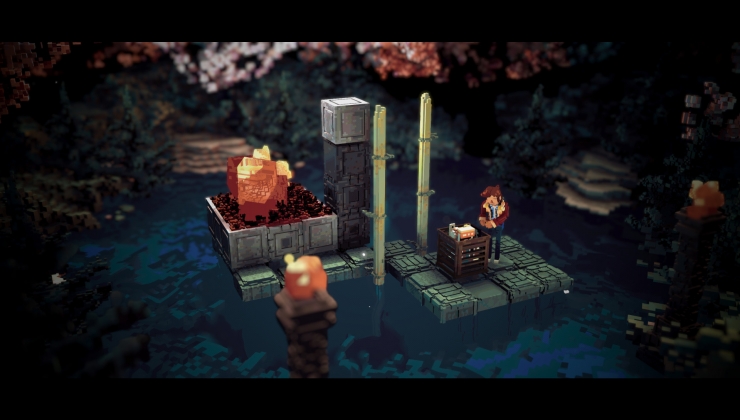