By Jennifer Micale October 05, 2020 The arts have always found inspiration in nature, whether the delicate brushstrokes of a landscape painting or the swelling chords of a symphony. The coronavirus pandemic has provided an added incentive to head outdoors: better air dispersal rates, noted Director of Choral Activities William […]

The arts have always found inspiration in nature, whether the delicate brushstrokes of a landscape painting or the swelling chords of a symphony.

The Harpur Chorale started out in the amphitheater between the Fine Arts and science buildings, taking in the view of the late summer hills as they sang. The Chorale, Treble Chorus and Chamber Singers have since moved to the lowest level of the parking deck near the Anderson Center, which not only keeps off the rain. The angle of the roof, back wall and the ground provide acoustic reinforcement, which proves especially helpful for the 40-member, mixed-voice chorale.

Associate Professor of Music and Africana Studies James Burns has also brought his ethnomusicology and African drumming classes outdoors since the semester’s start, either on the grass beside the Anderson Center or, when raining, under the nearby porch.

“One of the challenges is that the science hasn’t been settled on how the disease is being transmitted and how much of a risk it is for voice and wind instruments,” Burns said. “We’re doing it as safely as possible while allowing musical interaction.”

Singing, in particular, has posed serious concerns in terms of virus transmission. In the interest of safety, all campus singers perform masked and at least 12 feet apart. Any vocal ensembles meeting indoors are subject to a 12-person limit.

As it turns out, you can sing perfectly well while wearing a mask — provided that you don’t try to compensate for the reduction in volume by singing louder and fatiguing your voice.

“The masks don’t affect the physiology of singing; they affect the acoustics of singing,” Culverhouse explained. “Students have to work hard to develop ever-sharper listening skills so their ears are compensating and they’re not muscling through.”

As with many campus classes this semester, the vocal groups also have remote members. During practice, several singers have their cell phones on, allowing their remote classmates to hear the performance and sing along on Zoom. 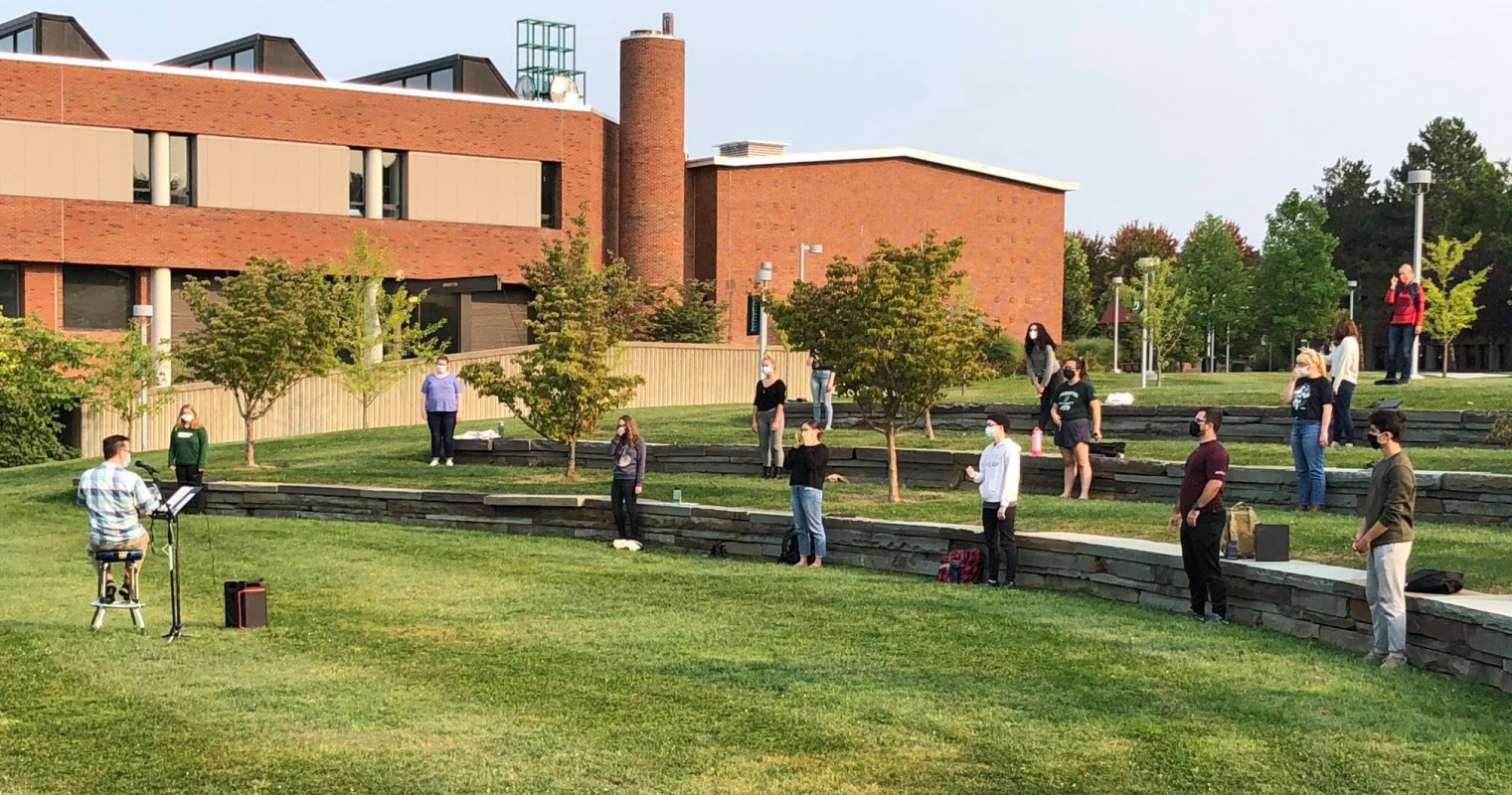 There are other technical innovations, too. A public address system allows the class to hear Culverhouse, and the University’s audio-visual staff have provided omnidirectional microphones that can pick up voices in a 30-foot radius.

With a mix of both online and in-person instruction, Burns’ ethnomusicology class features a Zoom lecture on Tuesday. On Thursday, students meet outside and perform songs on Orff instruments, an assortment of variously sized xylophones, metallophones and marimbas more typically seen in elementary schools. Arrangements range from Javanese gamelan and Chinese folk songs to steel pan calypso music from the Caribbean and more. Visit the web here and here to listen to Burns’ class perform outdoors.

In addition to safety and better acoustics for his African drum class, outdoor instruction offers a perceptual shift too often absent when music is taught indoors. In most parts of the world, life is seasonal — a pattern reflected in music, which shifts in accordance with the time of year, the color of the foliage or other natural factors, Burns explained.

That seasonal change is something we often take for granted, even when Binghamton is at its peak of autumn beauty. His outdoors classes have spied deer and chipmunks in their natural environment, as well as a beaver that apparently took a wrong turn.

While the outdoors classes were prompted by necessity, Burns sees possibilities even after the coronavirus recedes. Imagine a small outdoor ensemble tucked away under the trees, or a larger concert inviting visitors to enjoy both the music and Binghamton’s lovely vistas.

“Now that I’ve been doing it, I will keep doing it in the future, in the beginning of fall and the end of spring,” Burns said. “It resets people’s thinking and takes them outside their comfort zone. There is a lot to learn from this experience.”

Approximately 80 percent of Art and Design classes are in person, but many also head outdoors as part of their learning process, noted department Chair and Professor Natalija Mijatović. That was the case even before the pandemic, although the tradition has proved especially beneficial this year.

“People make great art in the worst of circumstances, and our students are no exception,” she said.

On a recent day, senior lecturer Alexandra Davis invited her drawing students to head outdoors and hone their skills. While her in-person students trekked to the science building courtyards, their online peers headed outside in their own communities to complete the same assignment on eye-level, one-point perspective in the landscape.

Think of a train track, going into space, Davis explained. Or notice the way that buildings in a cityscape become narrower and smaller as they recede into the distance. The lines of the bricks will guide you, she counseled students, but don’t try to draw each one. 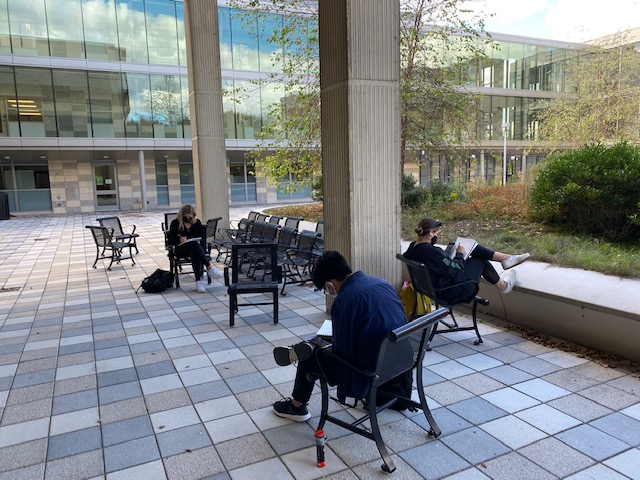 Angles and hard lines defined a courtyard between the science buildings, creating an optimal spot for sophomore Evan Lau’s sketch. About half of his classes are in person, with the other half online. While the thought of the virus lingers in the back of his mind, he has opted for a positive attitude: Most people are responsible, he said.

“It’s definitely a lot different in a social sense. It’s hard to make connections with people online,” he reflected. “Professors and students understand that you have to approach things differently.”

Junior Hadyn Santobuono and sophomore Laurel Garrahy settled on a bench near the greenhouse. They are taking only a class or two in person this semester, they said, although they feel safe in the classroom, where students are masked and observing social distancing protocols.

“I think it’s what people do outside of campus that’s more of a risk,” Santobuono said.

Tue Oct 6 , 2020
Mesa’s Museum and Cultural Advisory Board wants City Council to provide financial support to arts-focused nonprofit organizations to help them recover from the financial hit they took from COVID-19 pandemic. Noting that Mesa has already given small businesses stimulus funding, the letter asserts that it should extend similar aid to […]