Good morning, and welcome to the U-T Arts & Culture Newsletter. I’m David L. Coddon, and here’s your guide to all things essential in San Diego’s arts and culture this week. You’ve heard of those masochistic horseplayers who save their losing mutuel tickets? That’s how I feel clutching my unused […]

You’ve heard of those masochistic horseplayers who save their losing mutuel tickets? That’s how I feel clutching my unused ticket to Pearl Jam’s scheduled April 13, 2020, performance at Viejas Arena. That show didn’t happen, nor did the ensuing dates on the band’s planned tour in support of its “Gigaton” album. So what’s a longtime Pearl Jam fan to do?

A visit to the Eddie Vedder-led group’s website proves unsatisfying unless you’re a subscribing member of the Pearl Jam Ten Club. Streaming or buying music will cost you, and the videos posted on the site are a couple years old at least. On the up side, you’ll learn how admirably committed the band is to social activism, especially in the time of COVID-19. For fun, you can access Pearl Jam’s tour history, the dates of which go all the way back to 1990. Could bring back some memories, as it did for me.

If you get up to Seattle, Pearl Jam’s stomping grounds, the Museum of Pop Culture (MoPOP) reopened on Sept. 18 (allowing 25 percent capacity) and among the exhibitions is “Pearl Jam: Home and Away,” comprised of some 200 PJ artifacts. But I can’t move on without some music from Pearl Jam, which is so tight in concert. Here’s the August 2018 “Home Show” from Seattle’s Safeco Field. Stick around for the band’s covers of Pink Floyd’s “Comfortably Numb,” The Beatles’ “I’ve Got A Feeling” and, a Pearl Jam staple, Neil Young’s “Rockin’ in the Free World.”

Pandemic-inspired music has been with us almost from the middle of March. Recently, Union-Tribune pop music critic George Varga introduced us to Steve Poltz’s “Quarantine Blues,” the recording of which featured Jason Mraz on organ. But wait! There’s more! A USA Today story way back in May rounded up a list and links to quarantine- and social distancing-related recordings across multiple musical genres. Now, while it’s true that the late Chris Cornell recorded a cover of Guns N’ Roses’ ballad “Patience” four years ago, it was only released this summer, and though it’s not about waiting for our world to come back to us again, it could well be. In any event, it’s moving to listen to, for multiple reasons.

Last Sunday, Varga’s interview with Jon Bon Jovi ran in the U-T: “The 2019 Rock & Roll Hall of Fame inductee wears his heart on his sleeve on his new album, which addresses the fractured state of the nation.” Read the story here.

Unless you’re a boomer, a TV historian or a Beatlemaniac, you may not know who Ed Sullivan was. Being a bit of all three, allow me to illuminate you: Sullivan hosted the most popular television variety show of all time, from 1948 to 1971. (It was originally titled “Toast of the Town,” then afterward “The Ed Sullivan Show.”)

Even if you know neither Sullivan nor his show, a visit to the Ed Sullivan Show YouTube channel is a trippy time machine experience. Yes, you’ll be able to watch memorable performances from the Fab Four, Elvis Presley, the Beach Boys (in their striped-shirt glory) and Loretta Lynn (in her big-haired glory). But the quirky video clips just may be the most entertaining: For example: ventriloquists, a whip-and-lasso act, James Cagney teaching Sullivan how to imitate him, Borscht Belt comics galore and, of course, “Eddy’s” mousey puppet friend Topo Gigio.

I am not one of those luddites or paranoids who decries social media as the reason for all that’s wrong in the world. Consider, for one thing what our imposed isolations would be like this year without it. But I have to say, the film “The Social Dilemma,” now streaming on Netflix, shook me up a little. In it, techies such as ex-Pinterest boss Tim Kendall and Justin Rosenstein, who collaborated on the creation of the Facebook “Like” button, testify to all the societal, psychological and even physiological damage social media has wrought.

Most convincing is former Google computer scientist Tristan Harris, who’s co-founded a group called the Center for Humane Technology. (Doesn’t that sound like an oxymoron?) Learning how social media has become our Big Brother times 10 is the most unsettling revelation of all in “The Social Dilemma.”

The one downside to the 90-minute, Jeff Orlowski-directed film is its insistence upon being not a documentary but a docudrama, employing annoying intermittent dramatizations of a “real family” impacted by social media addictions. Worse still is a shuddering portrayal of villainous masterminds behind a control panel, determining how to manipulate all the social media guinea pigs out there. I admit it: during those sequences, I picked up my phone and checked my Facebook feed.

La Jolla Playhouse has added five more shows to its ongoing all-digital Without Walls Festival, most of them featuring local artists of color. Playhouse Artistic Director Christopher Ashley said the expanded programming will fulfill a growing appetite for online theatrical content and it supports the nation’s growing social justice movement. Read more about it in this story by the U-T’s Pam Kragen.

With less than three weeks to go before San Diego Opera’s drive-in production of Puccini’s “La bohème” opens in a sports arena parking lot, the company announced a casting change and new conductor this week. Soprano Ana María Martínez will step into the lead role of Mimi to replace singer Angel Blue, who is unable to perform. And San Diego Symphony music director Rafael Payare will conduct the opera’s 24-member orchestra of San Diego Symphony musicians. Payare replaces the previously announced Italian conductor Valerio Galli, who couldn’t travel to San Diego due to travel restrictions related to COVID-19. More about the changes in this U-T story.

University of California Television (UCTV) is making a host of videos available on its website during this period of social distancing. Among them, with descriptions courtesy of UCTV (text written by the UCTV staff):

“Gifts of the Storyteller”: In the study of history, a primary source is information created at the time under study, including artifacts, documents, diaries and more. Professional historians rely heavily on these original sources to provide insights into the mindsets and behaviors of vanished times and places. UCLA History Professor Brenda Stevenson studies American slavery, and because women of color in the Antebellum South were usually illiterate, there is little written documentation of their inner lives and experiences. Stevenson instead focuses on that era’s rich oral traditions, and in particular stories handed down by both slaves and masters.

“Technology Addiction”: Technology plays a growing and complex role in our daily lives. The benefits of technology are considerable, but so too are the risks. One such risk is technology addiction, an over-reliance on devices and digital media for knowledge, distraction and pleasure. Recovered video game addict Dr. Andrew Doan is an expert in technology and video game addiction. His research indicates that for the technology or digital media addict the dopamine release in the brain is similar to that of drugs and alcohol. In other words, we fall in love with our devices because they stimulate the brain’s pleasure centers.

“Building the Brain with Alysson Muotri”: Alysson Muotri leads a team at the UC San Diego Stem Cell Program in exploring the complexities of human brain function. Among the Center’s many avenues of research is growing clusters of the neuron cells that form the brain’s neural pathways. These cells self-organize into 3D balls called brain organoids. These spheres don’t have the anatomical complexity of a real brain but they do show brain-like activity, passing electrical signals from one cell to the next. Muotri believes that growing and studying organoids can aid in understanding brain development and causes of disorders such as autism and Alzheimer’s disease.

Fri Oct 9 , 2020
This post was contributed by a community member. The views expressed here are the author’s own. An exhibition of artwork by the founders of the Op Art movement is now on view at the Housatonic Museum of Art. The exhibit, entitled “Masters of Op Art,” features 13 dynamic pieces that […] 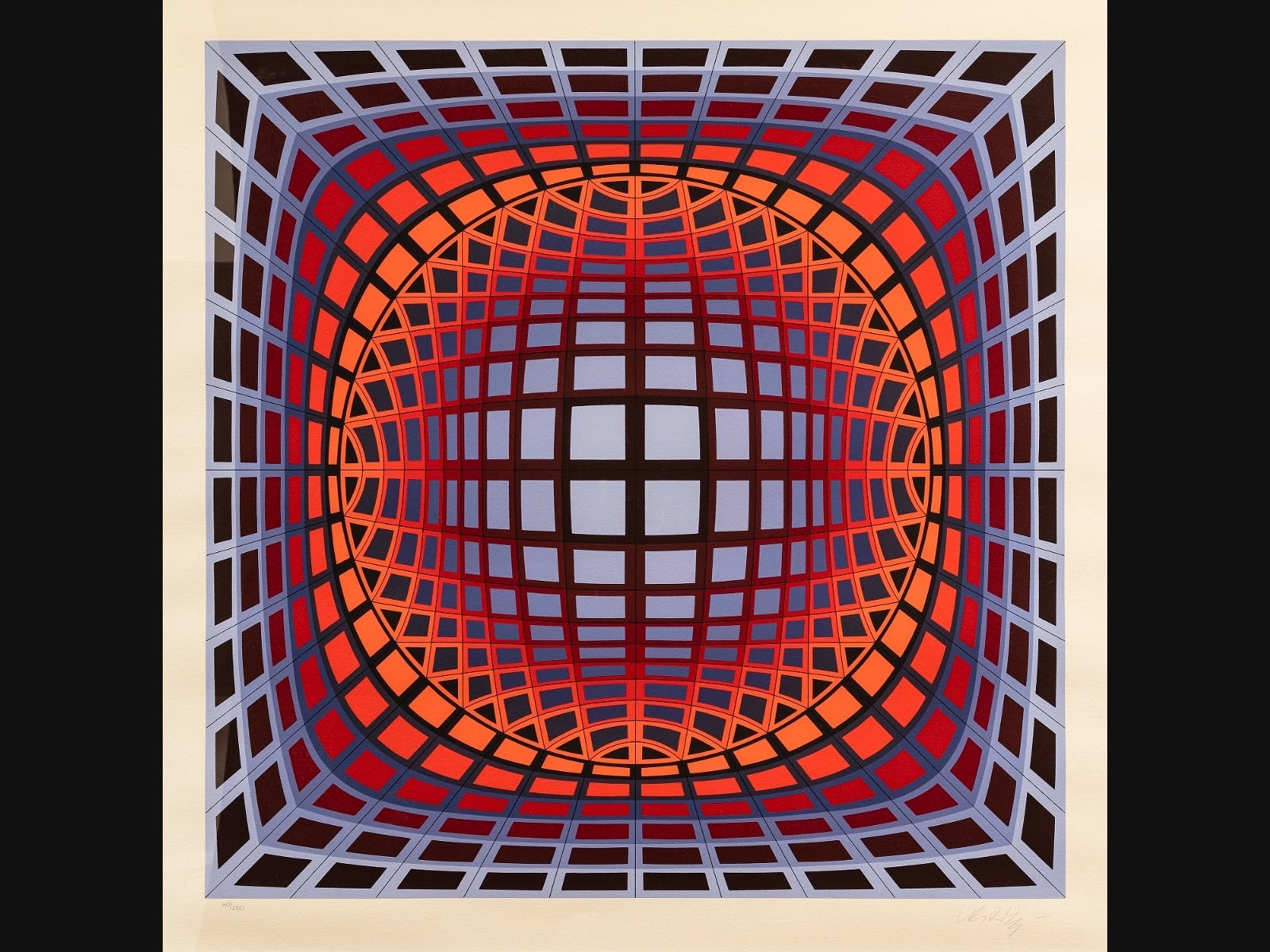