Trolley Dances (Courtesy photo by Manuel Rotenberg) Good morning, and welcome to the U-T Arts & Culture Newsletter. I’m David L. Coddon, and here’s your guide to all things essential in San Diego’s arts and culture this week. Before “site specific” became trendy in the performing arts world, there was […]

Of course this year is different. The 23rd Trolley Dances will have to wait for next year, but SDDT is celebrating the legacy of this longstanding event in “Trolley Dances Reflections on Film: The First 10 Years.” Footage for the hourlong film dates back as far as 22 years ago.

“I found everything in the first 10 years that I could find and just gave it to these kids, wholesale,” said SDDT Artistic Director Jean Isaacs. “I said, ‘I’m not going to tell you what to do with this.”

The “kids” are a pair of young videographers from Tijuana, Leo A. Huerta and Annya Katerina.

The film will be screened at THE LOT in Liberty Station Monday, Tuesday and Wednesday evenings at 8 (tickets are $20). Later, you can livestream “Reflections” between Oct. 2 and 4 for $10.

I had a chance to screen an early cut of the film, and what I saw I liked a good deal. For one, it reminded me of many of the Trolley Dances performances I witnessed myself, most of them somewhere along downtown’s Blue Line. Memorable among the chronological footage, too, are performances in Barrio Logan and at San Diego State, and interviews with company dancers and with choreographers such as Minerva Tapia and Terry Wilson. “Reflections” was also produced with a true binational and bilingual sensibility, making it a retrospective gift for Trolley Dances fans on both sides of the border.

Why has Trolley Dances endured and been so anticipated each year?

“I think people want to not just go sit in the theater,” Isaacs said. “They want to have an experience.”

Also on film and available for streaming (for $35) is an adaptation of Herbert Siguenza’s one-person show “A Weekend with Pablo Picasso.” Even though I saw this delightful production first at the San Diego Repertory Theatre, where Siguenza conceived it, and later at New Village Arts Theatre in Carlsbad, I thoroughly enjoyed experiencing it yet again. In fact, the film actually enhances the show by opening it up. Siguenza’s Picasso is seen outdoors in his garden at one point, and when visitors come to the door of his Paris flat we get glimpses of them. Dream sequences are likewise treated cinematically.

The premise is that the master artist has been commissioned to create six paintings over the course of a single weekend, and we are a sleepover guest who are there to watch him do so. Along the way, Picasso is alternately playful and vehemently philosophical, the latter manifested in observations such as: “Each picture is a vial of my blood. That’s what has gone into them — my blood.” Try to catch this one: It can be streamed through Oct. 14.

Back in March, in the early days of the pandemic as we know it, I interviewed Lamb’s Players Theatre’s regulars Caitie Grady and Charles Evans, Jr. The musical married couple were performing their favorite songs at home and posting them on Facebook. If you happened to catch any of these performances, you’ll be tempted by Lamb’s Cabaret, a 50-minute-long concert by Grady and Evans performed on the theater’s Coronado stage with piano accompaniment from Cris O’Bryon.

Grady and Evans are engaging, talented artists, and their 16-song set includes some treats for sure. Grady singing Joni Mitchell’s “Big Yellow Taxi” is one of them, as are Evans’ earthy covers of Johnny Cash’s “What is Truth” and “I Walk the Line.” (Evans portrayed Cash in Lamb’s’ production of “Million Dollar Quartet” last year at Vista’s Avo Playhouse.”) The most welcome treat of all for me was hearing Grady resurrect “Give Way” from the musical “Dogfight,” a show she co-starred in five years ago at Cygnet Theatre in Old Town. It was goosebumps time for me then, and still is.

Lamb’s Cabaret is $20 a ticket and is available through Oct. 15.

The National Basketball Association playoffs are going full bore right now, yet they only make me grieve all the more the loss of Kobe Bryant, who was killed in late January in that helicopter crash. Today is the last day to access a virtual exhibition from Beverly Hills’ Plastic Gallery called “8/24: Kobe Bryant.” The primarily black-and-white photographs by Michael Muller depict Bryant, one of pro sports’ most intense athletes, in all that intensity. Visiting, you’ll wish there were more photos to see, but you’ll wish even more that Koby Bryant was still among us.

The San Diego Latino Film Festival, canceled on March 12 due to the coronavirus pandemic, has returned this week, virtually. The 27th annual festival continues through Sunday. “Our curatorial team has done an amazing job in pivoting these past months …,” said festival founder Ethan van Thillo. “So we’re excited to bring this new virtual experience to our acclaimed annual San Diego Latino Film Festival. We know it’s not the same as being in-person all together, but we invite filmmakers, community partners and residents to sit back in the comfort of their home, watch some amazing Latinx movies, and actively participate in the many online Q&As with the guest filmmakers and celebrities.” Visit sdlatinofilm.com for more information.

“Mozart’s Enchantment”: The pieces on this program demonstrate the invention and versatility characterizing Mozart’s chamber music. The first, “Flute Quartet in C Major, “is a relatively recent discovery that is believed to be written by Mozart, but doubts of its authenticity lend an aura of mystery. The second, “Quintet in E-flat Major for Piano and Winds, “is one of several virtuoso pieces that Mozart wrote for winds. The final piece’s innocent title, “Divertimento, “denoting music that is light and easily digestible, shouldn’t fool the listener; this in one of Mozart’s most formidable compositions. Mozart is often light but never cheap.

“Modern Oceanography and the Changing Arctic Ocean”: A record-high temperature of 100 degrees has been recorded in the Arctic region, surprising and alarming climate scientists. The Arctic is changing rapidly in response to changes in global climate and economic activity, and yet much of it remains unexplored with modern scientific techniques. Scripps Institution of Oceanography researcher Jeff Bowman describes his group’s work in the Arctic as they seek to understand the profound ecological implications of changing sea ice conditions. Bowman also describes his team’s preparations to participate in the MOSAiC expedition, an unprecedented multi-national effort to study the high Arctic across a complete seasonal cycle.

“WIFire: Technology to Predict and Prevent the Spread of Wildfires”: Wildfires are very much in the news, as recent years have seen California’s once-predictable wildfire “season” steadily expand to nearly year-round status. Researchers at UC San Diego are working on cutting-edge technology to combat this constant threat. The WIFIRE Lab is a collaboration between the Qualcomm Institute and the San Diego Supercomputer Center. The resulting technology uses big data from cameras, weather stations, topography, and other sources to quickly predict where capricious wildfires will spread. And it’s not just theoretical: Fire departments like LAFD are using WIFIRE to get ahead of blazes before they get out of control.

In this week’s edition of Arts in the Time of COVID, Pacific editor Nina Garin talks about the San Diego Latino Film Festival, Halloween movies at Moonlight Amphitheatre in Vista and San Diego Opera‘s drive-in production. Watch it here.

Sun Sep 27 , 2020
This Miami based artist hopes exposures to his images can “still the mind” and “self help” people survive today if they do not feel like they can survive tomorrow. MIAMI – September 22, 2020 – (Newswire.com) ​​The Coronavirus has created some unreasonable demands. With almost daily news of the stress, […] 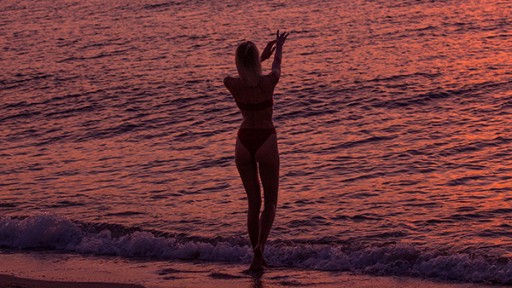