Good morning, and welcome to the U-T Arts & Culture Newsletter. I’m David L. Coddon, and here’s your guide to all things essential in San Diego’s arts and culture this week. Fictional portrayals of Abraham Lincoln tend to lionize the man. Understandably. The nation’s 16th president is arguably its greatest. […]

“Necessary Sacrifices” dramatizes two meetings between Lincoln and Douglass at the White House in 1863 and 1864. The play was filmed for North Coast Repertory Theatre on its Solana Beach stage, with Ray Chambers as Lincoln and Hawthorne James as the former slave, Douglass.

Hellesen’s play “has so much to say,” said the production’s director, Peter Ellenstein. “Here are two incredible men, both of whom were self-made almost completely, who rose to become the two most famous men in America if not the world.

“With all that is going on now — us still struggling to find racial equality — it’s the perfect time for this piece. It’s about our own humanity and trying to be better.”

This filmed play is scads more absorbing than the ubiquitous Zoom theater projects out there. It’s nearly two hours of tense confrontation between two towering historical figures. The booming oratory of James as Douglass tends to overpower Chambers’ Lincoln, but Hellesen has established Lincoln as a man who needs and wants to listen. The drama demands strict attention from viewers and can be somewhat exhausting in the telling, but the story is one of enduring importance.

“Necessary Sacrifices” can be streamed through Oct. 11. Tickets are $19.

When David Israel Reynoso was a little boy in Guadalajara, Mexico, he dreamed of growing up to become an Imagineer, the name for designers who create immersive environments and rides at Disney theme parks. Reynoso never made it to Disneyland, but the 39-year-old Midway-area resident has become the San Diego theater community’s de facto Imagineer. Over the past three years, he has written, designed and directed three immersive theatrical experiences through his company, Optika Moderna. The first two, “Waking La Llorona” and “Las Quinceañeras,” were sold-out smashes at the box office. The third, “Portaleza,” opened last week as part of La Jolla Playhouse‘s all-digital Without Walls Festival. Available for streaming through Oct. 4, it’s a hands-on, interactive experience that involves watching a film through a unique, self-assembled “portal.” Read more about Reynoso in this story by Union-Tribune theater writer and critic Pam Kragen.

When Jennifer Eve Thorn saw “The Niceties” popping up on “must-read” play lists, she avoided it because the title alone sounded boring. But when she finally read the script about race and privilege in 2016 America, she found it so compelling she couldn’t wait to produce it at Moxie Theatre. Then the pandemic forced Thorn, Moxie’s co-founder and executive artistic director, to move all of the company’s programming online. And “The Niceties” wasn’t a good fit for the work-from-home Zoom-based plays the company produced for 12 weeks earlier this year. “This didn’t seem like the kind of play you throw in someone’s lap in their living room and walk away,” Thorn said. “Because of the nature of this play we felt it was really important for our community to discuss it together live after watching it.” So instead of presenting “The Niceties” as stream-at-will filmed stage production, Moxie is screening “The Niceties” at set showtimes Thursday through Oct. 4 that will be surrounded with live audience interaction. Thorn will open each show with a live greeting, and after each performance, she’ll host a webinar with guest speakers where audience members can join in the discussion. Read more about “The Niceties” in this story by the U-T’s Kragen.

By all means, devote an hour of your time to the San Diego Symphony’s “Musical Gumbo: Jazz and the Black Experience.” The symphony’s Jazz @ The Jacobs curator, Gilbert Castellanos, interviews virtually saxophonist Charles McPherson and bassist Marshall Hawkins. In his introduction, Castellanos rightly refers to them as “jazz royalty.” In what is much more than reminiscence, McPherson and Hawkins recount playing with icons Charles Mingus and Miles Davis, respectively, and of the racial injustice Black musicians encountered on the road and even within their own musicians unions. It’s heartening to learn that both McPherson and Hawkins are teaching young musicians these days and in so doing passing on valuable life lessons. “Oppression,” McPherson says during the interview, “has broadened the scope of my emotionality.” And his advice to all the survivors of oppression? “Learn,” he said, “to have the capacity for joy.”

Local documentary filmmaker Raul Sandelin (“A Box Full of Rocks: The El Cajon Years of Lester Bangs,” “Ticket to Write: The Golden Age of Rock Music Journalism”) has a new film in the hopper, one he says is about 75 percent complete. “KGB-FM: The Station That Rocked San Diego” takes a closeup look at the radio station from its shift from “Boss Radio” to what would become known as album-oriented rock or AOR, through about 1995 when it was sold to corporate Clear Channel (now iHeartMedia). While the colorful history of KGB (the “Homegrown” albums, the Sky Show) will be highlighted in footage and interviews with everyone from “Shotgun” Tom Kelly and Gabriel Wisdom to Ted Giannoulas (the onetime “KGB Chicken”), the documentary has broad aspirations. “We will talk about the whole FM radio revolution that was experienced in every town across the country in the late ‘60s and early ‘70s,” said Sandelin. Taking it even further, Sandelin calls his film, which he hopes will one day air on KPBS-TV, “a curation of boomer culture.”

I was deeply saddened by the recent passing of Diana Rigg — make that Dame Diana Rigg — at the age of 82. While Rigg will always be most loved for her portrayal of Emma Peel in TV’s “The Avengers,” she was most of all committed to the theater, whether it was her early roles in the Royal Shakespeare Company, her “Medea” in 1992 or her searing Martha in “Who’s Afraid of Virginia Woolf? in London in ’96. I was fortunate enough to see Rigg in the latter, an experience I will not forget. Rigg’s motion picture career is by comparison scant, but many will remember her in the 007 flick “On Her Majesty’s Secret Service.” It’s a shame that George Lazenby and not Sean Connery was Bond in the 1969 film because the resulting sparks might have been legendary. (The movie can be viewed via Amazon Prime.) Rigg’s Tracy Draco was the only woman to marry Bond in a film – though the shocking ending of the picture put an end to that. Still, the closing “We Have All The Time in The World” is and was a reminder of how suddenly something precious can be gone.

Flutist Holly Hofmann and pianist Joshua White headline Jazz at The Athenaeum Streaming Live! on Monday at 7 p.m. They’ll be performing from the La Jolla venue’s Music Room, one of the most intimate spots in town.

Chris Daughtry’s next “Live From Home” Virtual Tour performance can be streamed for viewing Tuesday at 6 p.m. Pacific Time. This concert benefits in part the Music Box in Little Italy and will have a San Diego flavor.

The San Diego Master Chorale has announced an all virtual 2020 season, which kicks off Sunday at 2 p.m. with “O What a Beautiful City!” Music Director John K. Russell will interview composer Shawn Kirchner, “whose rich, sophisticated choral works are informed by his diverse musical interests.” The interview will be followed by the world premiere of San Diego Master Chorale’s performance of Kirchner’s Ukrainian-Orthodox-inspired arrangement of the African-American spiritual “O What a Beautiful City!” Tickets are $20 per concert or $100 for a Fall Series All-Access Pass with access to all six performances at a discounted rate. For more information about the season and for tickets, go to sdmasterchorale.org.

A GoFundMe campaign with a goal of raising $150,000 has been launched to help keep the doors of Culture Shock Dance Center open. “It is with heavy hearts we reach out to you to share the updated status of Culture Shock Dance Center,” reads a note from owners Angie Bunch and Joe Savant. “Despite the PPP and SBA loans, online dance classes and newly added in-studio dance classes, we have not been able to meet the demands of keeping our business afloat.

“While we would love nothing more than to offer you another 17 years of our dance programs, we have approached the final weeks of operating your ‘Second Home’. Funding is needed as soon as possible so we can plan appropriately for October. We ask those of you, who are able, to contribute to our GFM campaign in order to keep the doors open through the end of the year.”

University of California Television (UCTV) is making a host of videos available on its website during this important period of social distancing. Among them, with descriptions courtesy of UCTV:

“The Power of Five”: The quintet has long been a staple of chamber music, and many celebrated composers past and present have written works specifically for these ensembles. In this concert recorded in August 2017, La Jolla Music Society’s SummerFest presents a program celebrating the versatility of quintets that spans three centuries and explores unusual sonic colors. The three works include Beethoven’s classic “String Quintet in C-Major, Opus 29,” his only string quintet; Xiangang Ye’s contemporary “Gardenia for String Quartet and Pipa,” featuring pipa virtuoso Wu Man; and Dvořák’s popular “String Quintet in G Major with Double bass.”

“Icons of Dissent”: Throughout human history certain charismatic figures have represented challenges to the prevailing world order. UC San Diego’s Jeremy Prestholdt examines four such dissenters whom he labels “icons of dissent”: guerrilla leader Che Guevara, reggae superstar Bob Marley, rapper and actor Tupac Shakur, and Al-Qaeda terrorist leader Osama bin Laden. Prestholdt examines the unique appeal of each of these figures over five decades, focusing on their relationship to two aspects of an increasingly interconnected world: the tension between shared global symbols and their local interpretations, and the intersection of political vision and consumerism, particularly evident upon each icon’s death.

“Planetary Defense: Avoiding a Cosmic Catastrophe”: Our planet has been continually bombarded by asteroids since its formation 4.5 billion years ago, and on film practically since the dawn of Hollywood. While the scenarios presented in movies like “Armageddon” and “Deep Impact” seem unlikely, it’s true that some Near-Earth Objects (NEOs), especially those as yet undiscovered and uncharted, are potential threats. A large impact could trigger an Extinction Level Event (ELE) similar to the asteroid impact that wiped out non-avian dinosaurs 66 million years ago. Fortunately, scientists at Lawrence Livermore National Laboratory are using computer simulations to develop ways to mitigate or even prevent a cosmic disaster.

Thu Sep 24 , 2020
Winnetka, Ill. – Lagniappe-Potpourri: From Scratch kicks off the 2020-2021 New Trier High School Performing Arts Season with digital premieres of a recorded show. Lagniappe-Potpourri features student-created scenes, songs, and dances as well as student-designed sets, lights, props, and costumes. Students are supervised in all levels of production and decision-making […] 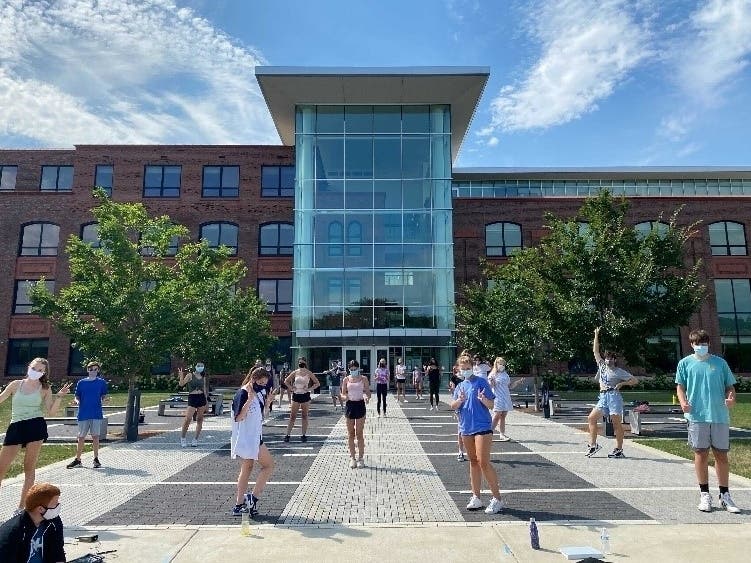