An entirely new style of ancient art has now been documented dotting the vast wilderness of Arnhem Land, a historical region in the continent’s north.

From Awunbarna (also known as Mount Borradaile) all the way to the Namunidjbuk clan estate of the Wellington Range, scientists and local Aboriginal research partners have found 87 rock shelters housing unusually tall cave paintings, some of which are larger than life.

The expansive outdoor gallery, which stretches over 130 kilometres (80 or so miles), contains 572 individual pieces, each of which puts a strong emphasis on the natural world and humanity’s place within it.

“Human figures are frequently depicted with animals,” says anthropologist Paul Taçon, “especially macropods, and these animal-human relationships appear to be central to the artists’ message.”

Above: A male Maliwawa human figure with cone and feather headdress (1.44 metres tall) reaches out to a large bird with one hand and a large macropod with the other (possibly an emu and kangaroo).

Discovered for the first time in 2008, these unusual scenes and compositions with their diverse subject matter look remarkably different to other ancient art discovered in the region.

Compared to older cave art depictions, including the style known as Dynamic Figures, the newly named Maliwawa Figures are less focused on humans, and more on animals. In fact, only about 42 percent of the paintings are of humans, roughly half the percentage found in Dynamic Figures.

“The artists are clearly communicating aspects of their cultural beliefs, with an emphasis on important animals and interactions between humans and other humans or animals,” says Taçon, who works at Griffith University in Australia.

“They’re a missing link between the well-known early-style Dynamic Figures, about 12,000 years of age, and X-ray figures made in the past 4,000 years,” he adds

The red ochre and mulberry strokes are not as filled in and detailed as later X-ray cave art – named so because internal structures of animals and human figures are made visible – but unlike Dynamic Figures, the humans are more stagnant and less expressive, appearing to almost float in space surrounded by an “unearthly aura”.

One of the paper’s authors, Namunidjbuk elder Ronald Lamilami, named the new style in his local Mawng language after an area within his traditional clan estate. Hence, they will be known as the Maliwawa Figures.

Above: Large male Maliwawa human figures from an Awunbarna site. The largest male is 1.95 metres tall.

Figuring out when they were drawn is tricky. Was this an art style that lasted for a long period of time, or was it the signature of one prolific local artist?

Radiocarbon dating and comparison to other regional styles suggests it was made sometime between 6,000 and 9,400 years ago, although judging by the fauna depicted, researchers say the true age is probably on the later side.

Back-to-back figures, whether human or animal, are not found in Dynamic Figure cave art, but in the Maliwawa Figures, this composition was common.

Two bilbies, for instance, are painted facing away from one another, and this could suggest the back-to-back style of later Aboriginal cave art began with the Maliwawa figures.

The bilbies are remarkable for another reason, too. These creatures are usually found in arid and semi-arid environments much further to the south, and this indicates extensive travel by early Aboriginal communities.

Nor was this the only animal seemingly out of place. This expansive inland collection also contains the oldest known depiction of a dugong.

If this particular art piece was drawn closer to 9,000 years ago, researchers say it would have required a 90 kilometre trek to the ocean.


“The dugong painting indicates a Maliwawa artist visited the coast,” the authors write, “but the lack of other saltwater fauna may suggest this was not a frequent occurrence.”

Bruno David, a rock art expert who was not involved in the study, told the Australian Broadcasting Corporation (ABC) he agreed the Maliwawa figures represent a new art style, not before seen, but he cautions against making too many assumptions.

“While there’s something that looks like a bilby to us, it could be the convention of the day that wallabies were painted with thin ears rather than wider ears,” he said.

Even the human figures sometimes blurred the lines of species. One figure was depicted with many lines covering its skin, a possible suggestion of hair, while another figure seemed to have an animal head.

Similar to Dynamic Figures, Maliwawa humans were often featured with headdresses, which suggests some sort of sacred ceremony.

Still, unlike older depictions, Maliwawa humans were not shown with nearly as many materials. In fact, across all the hundreds of images, only four items showed up: headdresses, spears, bags, and a boomerang.

“These patterns indicate a shift in iconographic emphasis for communicating with rock art away from material culture in favour of animals,” the authors write.

If only modern culture were headed in the same direction.

The study was published in Australian Archaeology.

Desperate for art and culture IRL? Here are 6 SoCal shows to see in person

Fri Oct 2 , 2020
The L.A.-based Heidi Duckler Dance has planned a series of walk-up or drive-in outdoor shows as an alternative way of engaging live performance during the COVID-19 pandemic. (Heidi Duckler Dance) Tired of just streaming shows at home? Ready to lay your eyes on a real canvas, hear the patter of […] 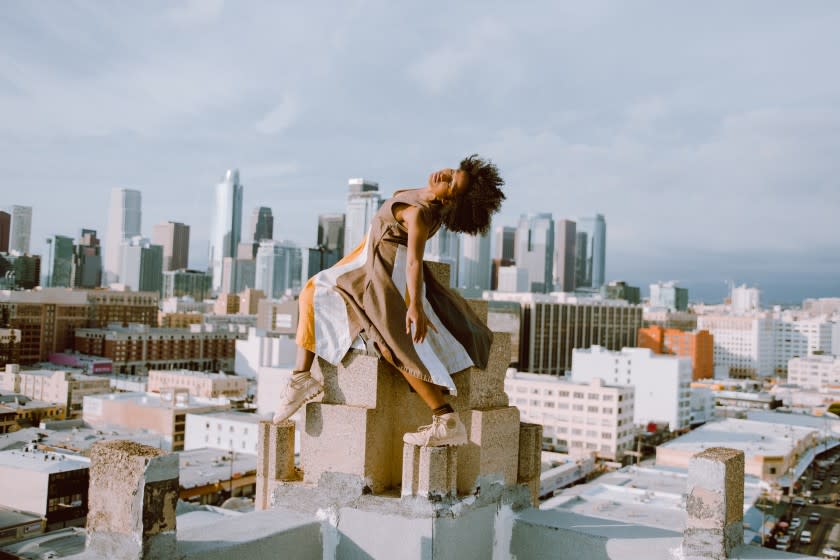