September 23, 2020 7:55 AM EST Mark Scicluna, a Senior illustrator at Rockstar Games, showcases his incredible God of War inspired comic book cover art. I know you probably don’t need me to tell you this but, you know, just in case anyone missed it – a tasty little teaser […]

I know you probably don’t need me to tell you this but, you know, just in case anyone missed it – a tasty little teaser for God of War 2 was shown at PlayStation PS5 Showcase recently and BOY, was it a crowd-pleaser. Although we don’t know very much about the sequel at all, the teaser trailer stated that we would get our hands on it at some stage next year. As we hope and pray for this year to be over as soon as possible, it won’t be long before we can get stuck into the next installment of the franchise but until then, I’m sure we will have plenty of tidbits, trailers, and gameplay visuals to keep us going until launch. As always, we also have plenty of pieces of fan art to showcase as we wait with bated breath, and today, it’s Mark Scicluna‘s turn as he displays this incredible God of War comic book illustration.

Mark Scicluna, who lives in Edinburgh and is a Senior illustrator at Rockstar Games, has illustrated more than 25 children’s books and has also been awarded three Illustrator of the Year Awards at the Malta National Book Awards. Mark states that his artwork is inspired by pop culture, comics, and obscure memorabilia typically with an added dose of grotesque humor. As we check in on his latest work, Mark has taken the highly acclaimed game by Sony’s Santa Monica Studio and turned it into a God of War comic book cover masterpiece. Kratos and Atreus take up the front cover of the comic illustration as they engage in a fierce battle with Kratos out in front with his trusty Leviathan Axe and Atreus patiently waiting behind, ready to pounce with his Talon Bow.

Mark’s usage of vibrant colors that include yellows, greens, reds and blues really make this comic cover stand out and not to mention this it’s only 25c – what a steal! Mark’s retro feel that he has implemented to the artwork is also very charming, giving the illusion that it could be a collectors piece. Although the God of War comics has been available for many years and more recently by Dark Horse comics, this amazing cover edition by Mark would go so well with the impending sequel. You can check out the front cover of Mark’s God of War inspired comic book below and for more like this, head over to his Twitter or website to check out many others that are equally as good.

To see another other piece of fan art that this time depicts an older Atreus, you can check out Sam Yang who does a bunch of brilliant digital paintings in photoshop. Recently Sam captured Atreus as a fully grown man and Kratos as a much older man in the background – it’s a really stunning piece that you can view right here. Coming in with some cosplaying adventures is Ibelinn, a talented cosplayer from Norway who mimicked the beautiful style of God of War’s goddess Freya and it suffice to say that all her hard work and hours put into this cosplay truly paid off. For those of you who are big Kratos fans, you may dig this clay sculpture of the big man himself done by the incredibly talented Reddit user and artist Flompydompybompy that is crafted with the finest touch and also impeccably detailed.

At the start of the year, Sony and Santa Monica Studio released an episode of the Worlds Collide podcast, which is a deep dive into how the many elements of God of War came together to tell a rich and deep narrative. In one particular episode called “The No-Cut Camera,” we got a look at how the studio managed to pull off a single-take camera effect with no cuts. We all know that God of War director Cory Barlong is the king of witty banter on Twitter and recently, we saw him and The Last of Us director go head to head in a jokingly way by pitting the two games by claiming that God of War uses more teraflops than 2013s The Last of Us.

God of War is available exclusively on PS4. If you have yet to experience the game for yourself, you can pick up the game right now over on Amazon. Make sure to keep an eye on the DualShockers website for all God of War 2 news and information regarding the game in the coming months.

This post contains affiliate links where DualShockers gets a small commission on sales. Any and all support helps keep DualShockers as a standalone, independent platform for less-mainstream opinions and news coverage.

Thu Sep 24 , 2020
An unseen musician plucks a cello in a halting, haunting melody as a seemingly drunken cameraperson flits between images of the Mojave desert at sunrise and artist Brent Holmes dressed as a pantsless cowboy. He stands alone, among the brush and distant mountains, smokes a cigar, eats a peach and […] 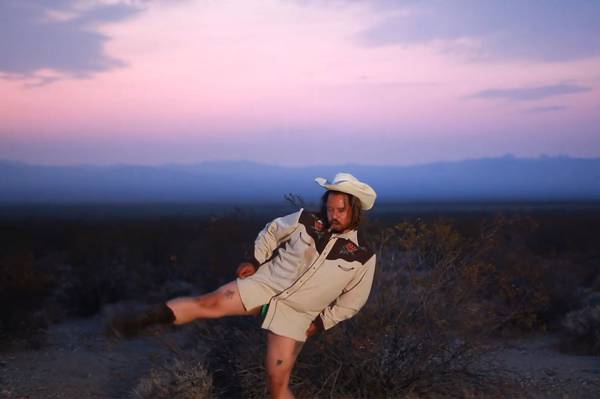