© Provided by New Straits Times A STREET Art tour is one three walking tours organised by Yellow House KL, a non-profit organisation that executes transformative sustainable approaches to address social issues such as homelessness. The other two tours are Haunted Tour and the Multicultural Tour. The tour starts from […]


A STREET Art tour is one three walking tours organised by Yellow House KL, a non-profit organisation that executes transformative sustainable approaches to address social issues such as homelessness. The other two tours are Haunted Tour and the Multicultural Tour.

The tour starts from Kasturi Walk, a covered walkway, which resembles a Wau Bulan and known as Kasturi Walk, located next Central Market at Jalan Hang Kasturi, a street named after one of the five Malay warriors who lived during the Malay Sultanate of Malacca (1400-1511).

This is less than 500m from Masjid Jamek that sits at the confluence of Sungai Kelang and Sungai Gombak, the very place that gave the city its name.

And Central Market is not short of its own history and tales too. A favourite meeting place for locals and a must-visit destination for tourists, it started off as a wet market which was built in 1888.

Today, Central Market is a centre for Malaysian culture, arts and craft. It offers visitors a unique shopping experience where they can bring a bit of Malaysia back home.

The two-hour plus street art tour stretches for about 4.5km, looking for 14 street arts painted on walls of the buildings in the surrounding area. The street arts were parts of the initiative by Petronas called Project Tanah Airku to promote patriotism through art.

From the Central Market, the tour crosses the busy Jalan Hang Kasturi to Jalan Sultan to look for the famous art installation – a chopped mini school bus for his installation titled Rage Against The Machine by Lithuania-born artist Ernest Zacharevic.

Another spot where you can check out his artwork is along Jalan Gereja, where a wall mural titled Sampan Boy is painted against Wisma Allianz. The Sampan Boy shows a boy sitting in a sampan as it passes by a house on stilts, from which a woman looks out as her cat naps on the stairs.

At a spot in Jalan Panggung, a stone’s throw from the tourist hotspot that is Chinatown, there’s a large mural depicting an elderly goldsmith at work, titled Goldsmith, by Russian artist Julia Volchkova.

Further away from Goldsmith, in Jalan Raja Chulan, you will not miss the colourful mural depicting a boy wearing a tiger hat while playing with a handheld touchscreen device, titled Brave by local artists’ Yumz and Anokayer’s (of Mediumtouch).

The last spot on the walk is a hidden mural titled The Malaysian Model Heart Kit by artists Kangblabla and Reeze, located a short walk from the Masjid Jamek LRT station in Lebuh Ampang.

Set amidst the neo-classical shophouses built in the 1930s, the artwork is simple but thoughtful. At the centre of it all is a heart with colours inspired by our Jalur Gemilang ­— blue, red, white and yellow. Surrounding the heart are words of wisdom such as berani (brave), intelektual (intellectual), teguh (firm) and azam (ambitious). These are the same words that have defined us as a nation in our 61 years of independence.

NOTE: This story was originally written by Loong Wai Ting and published on April 19, 2018. Read the full story HERE

Sat Oct 10 , 2020
Two decades ago, Andrew LaMar Hopkins was working as an antiques dealer in New Orleans, selling cabriole-leg tables and gilt mantel clocks from a Garden District shop he ran with his then-boyfriend. On the side, Mr. Hopkins painted small, folksy scenes of 19th century Creole life, which he sold for […] 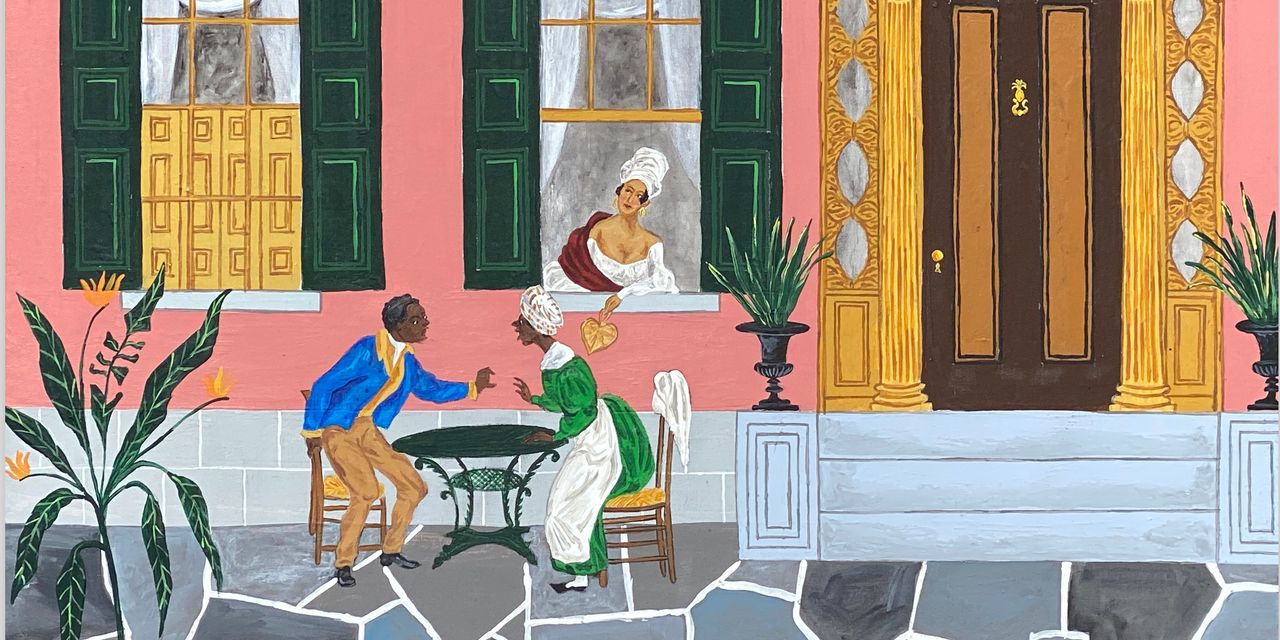