In the historic core of its campus, Princeton University will soon receive a new cultural beacon. Unveiled recently, the design for its art museum by AD100 and Royal Gold Medal–winning architect Sir David Adjaye will create a porous, flexible building, a replacement for the current home of the university’s collections […]

In the historic core of its campus, Princeton University will soon receive a new cultural beacon. Unveiled recently, the design for its art museum by AD100 and Royal Gold Medal–winning architect Sir David Adjaye will create a porous, flexible building, a replacement for the current home of the university’s collections on the same site. In collaboration with museum director James Steward and architecture firm Cooper Robertson, Adjaye has proposed a reconstruction that will double the square footage of the existing facility, introduce a contemporary design that references its historic neighbors, and give the museum a new sense of accessibility when it opens in 2024.

The existing museum is a “patchwork of different expansions and times that have been welded together,” so navigating its galleries is difficult and some spaces have become more prominent than others due to visibility, explains Adjaye. Its current form “constrained curatorial opportunities,” adds university architect Ron McCoy, and “did not meet the academic needs of a modern teaching museum and had no dedicated space for public events.” The new three-story building will be composed of seven connected pavilions that allow a substantial number of works to be exhibited at the same time on one level. In addition to creating more opportunities for discovery within the collection, the design plans galleries that alternate in size, reducing the fatigue that sameness can bring to a visitor. “The interior enhances the storytelling of art,” says Adjaye, who cites the triple-height lobby, connected to the existing library, and the Grand Hall, a space at the heart of the building for open storage display or lectures, as other elements of the new museum that will bring students, faculty, and visitors closer to more art than ever before.

Centrally located at the intersection of campus axes and several diagonals, the museum is ripe to be a hub for gathering. However, the enclosed nature of the existing building does not invite interest to be sparked in passersby. “The topography of the Princeton campus, and the morphology of its architecture, has long meant that space, like water, rolls down freely along the buildings and streams to Lake Carnegie. The new design of the Princeton University Art Museum settles perfectly in that stream like an archipelago,” explains Guy Nordenson, a professor of architecture at Princeton University, noting too that it is “intertwined with the surrounding nature and architecture facing on all sides, creating multiple views outward and in.” With a permeable ground floor under some lofted pavilions, Adjaye has created “a structure of all fronts and no back,” the architect says. “Not only are students able to weave throughout the site, but there is relationality to the other campus buildings” through the materiality—bronze, glass, and stone like the campus’s collegiate Gothic structure—and sight lines from the new museum.

Adjaye, whose previous art museum experience includes the Smithsonian National Museum of African American History and Culture in Washington, D.C.; Ruby City in San Antonio; and the Studio Museum in Harlem, believes this design is an example of a new type of teaching museum. As he explains: “It’s a synthesis of art, learning, and social opportunities that reinforce its position as both a hub and cultural gateway for the arts and humanities on campus and a destination for visitors around the world.”

How Scorched Earth turned ash from war zones into art

Thu Oct 8 , 2020
Anish Kapoor’s acrylic on paper for the ‘Scorched Earth’ auction It is a long way from shaking a collection box on a street corner. Simon Butler, a charity director, last year found himself crouching on the ground in 43C heat, spooning ash from burnt crops into plastic tubs on the […] 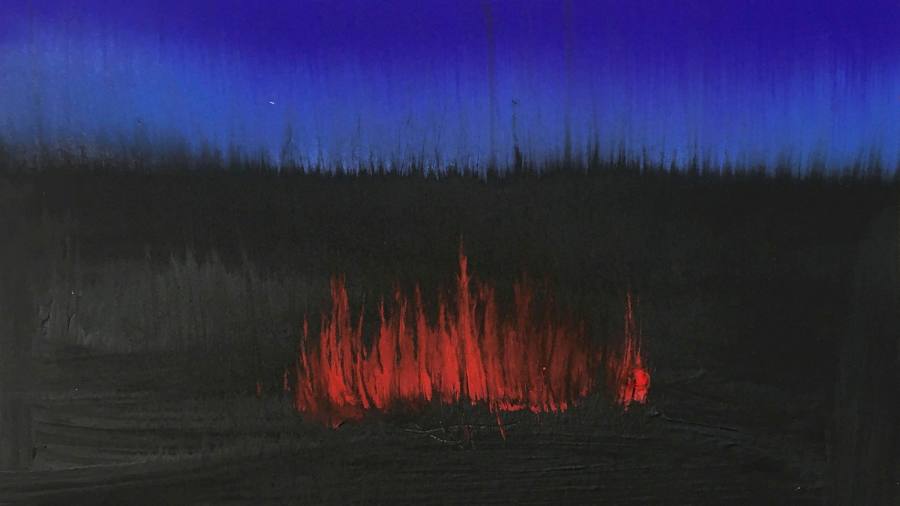