Artists working with algorithms have existed for centuries, and computers have helped bolster their work Photo by Nghi Tran | The State Press “Algorithmic art predates the rise of technology with evidence found from Islamic tessellation to 15th-century Renaissance art.” Illustration published on Sunday Sept. 13 2020 By Sam Ellefson […]

Artists working with algorithms have existed for centuries, and computers have helped bolster their work 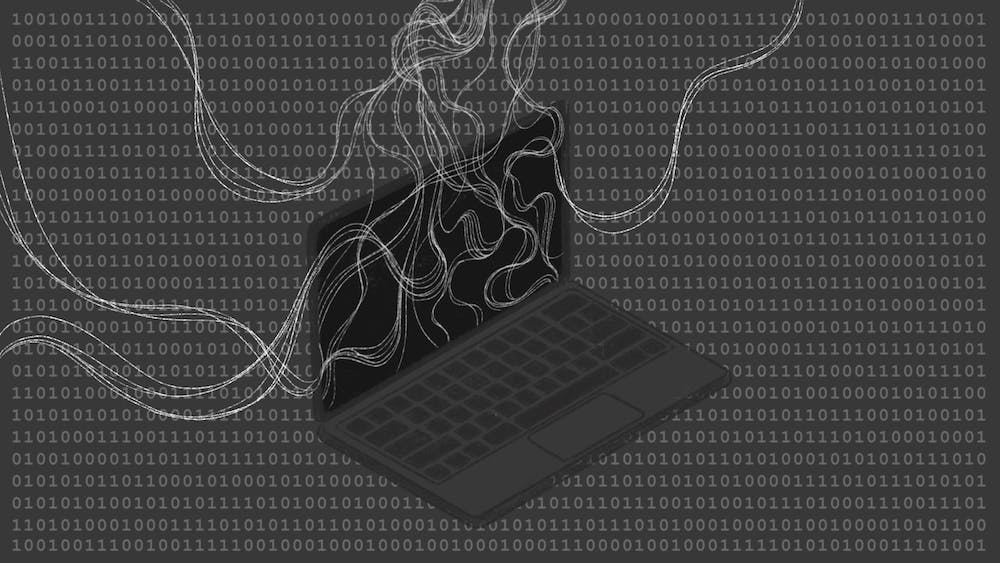 In our present-day, digital art is defined by its limitless stylistic possibilities and methodologies. During its formative years, neoterics sought to further the existing relationship between mathematics and art through the burgeoning technologies of the postmodern age.

One of the earliest instances of digital art, born out of an urge to challenge conventional means of creating work and explore technology’s relationship between aesthetic and intellectual value, is Ben Laposky’s “Oscillon” works.

These abstract electrical compositions, as the Iowa-born mathematician-turned-abstractionist Laposky described them, were generated by photographing electronic beams outputted by a cathode ray oscilloscope with sine wave generators.

As computers gradually became more accessible to academics in the latter portion of the 20th century, mathematicians and scientists began to delve into artistic experimentation with these new technologies through plotter drawings, which tended to veer toward abstraction due to the limited capability of output devices.

Frieder Nake, one of the founding fathers of what was then called computer art, utilized this method of computerized drawing while drawing upon Max Bense’s theory of information aesthetics, a mid-century attempt at establishing an algorithmic approach to measuring aesthetic merit that superseded subjective discernment.

Bense’s theory laid the groundwork for contemporary algorithmic, or generative, art, an experimental and dynamic field becoming increasingly prevalent within the vastness of 21st-century digital art.

Another pioneer in both conceptual art and algorithmic art was Sol Lewitt, an American 20th-century painter who believed the intellectualism of conceptual art formed a new, pragmatic role for the artist to fulfill converse to romanticism.

Lewitt argued art should have an algorithmic outline similar to architecture, allowing either a separate entity to create the envisioned work or for the creator to never make the work at all, relishing in the artistic nature of the proposed design.

Algorithmic art predates the rise of technology, and evidence of the use of algorithms to achieve aesthetic harmony can be found in Islamic tessellation and 15th-century Renaissance art.

In the 1960s and ’70s, “conceptual art had taken a foothold,” Vicario said, and there was overlap between algorithmic art, conceptual art and film.

“Ever since then, artists have used mathematics and algorithms to produce works of art,” Vicario said. “I think a lot of people get confused … when looking at something that was produced algorithmically and sometimes confuse it with video. Video seems to be the kind of default term, which is something that artists are moving away from because it really doesn’t explain the complexity and the use of engineering.”

Michael Pierre Price, an Arizona-based digital artist and former physicist, said one intriguing aspect of working with fractals and algorithms is the ability to get vastly different outcomes from a unitary method.

“In one of my 3D fractal programs, what I did was I took a black-and-white 2D image of a clock face and used that as the seed for one of the mathematical sets in that program,” Price said. “And I got some really interesting imagery to come through where the clock shape was manipulated and changed and mutated… I’m not trying to do tech demos using math, for me it’s a tool.”

Vicario cited the installation “Mike Kelley 13” by Jennifer Steinkamp, a digital projection of a wind-blown tree changing with the seasons that is housed in the Phoenix Art Museum as “an example here in the Valley” of algorithmic art.

“Most algorithmic art is generated by a computer because a computer can do so much more than a human can by hand,” Roeger said. “While M.C. Escher didn’t have a computer to generate all of his really intricate tessellations … you can’t get very complex if you don’t bring a computer into the picture.”

Using hardware in algorithmic art allows for heightened efficiency and accuracy, Roeger said, and both the algorithm itself and its output are artistic in nature and can raise questions pertaining to autonomy, fortuity and uniformity.

“There are two main strands of interest in contemporary art, and one of them has to do with, I would say, gender and identity, and I think the other has to do with digital art,” Vicario said. “I think those are kind of the areas that I’m most interested in and seeing as a path toward the future.”

Central ideas within contemporary art have been posed and elaborated upon continuously for the past century, with the mediums in which they’re expressed developing alongside technology, Vicario said.

“I like the fact that the ideas always drive the artwork, and not the other way around,” Vicario said. “It’s a danger when you’re thinking of algorithmic art or any kind of digitally-based new media art that the bells and whistles of the object supersede the importance or relevance of the message.”