MINOT, N.D. (AP) — Sculpture becomes storytelling or carries a message in the hands of Rich Solberg of Minot. But he’s not disappointed if another person’s perspective on his metal art goes in a different direction. “That’s art. That’s the way art is. Let people interpret it for themselves,” he […]

MINOT, N.D. (AP) — Sculpture becomes storytelling or carries a message in the hands of Rich Solberg of Minot. But he’s not disappointed if another person’s perspective on his metal art goes in a different direction.

“That’s art. That’s the way art is. Let people interpret it for themselves,” he said.

Solberg currently has a display at the Taube Museum of Art. A veteran in the art community, it’s his third show there and just one of the venues where the public might have seen his handiwork.

A couple of Solberg’s unusual works have earned Best of Show at the North Dakota State Fair in recent years. Family skis crafted into a bench and a life-sized, intricate metal skeleton atop a motorcycle are eye-catching, and people can view them at the Taube, the Minot Daily News reported.

One of his most impressive pieces was placed at First Lutheran Church in Minot about a year ago. He welded a cross 12 feet tall and six feet wide that features numerous Lutheran and Christian symbols.

His Taube display includes a similar cross – smaller but just as ornate – that will go to his boyhood church, American Lutheran in Stanley. It features blacksmithing techniques in the vines and leaves and is decorated with a variety of crosses, hearts, carpenter tools, numerals of the 10 Commandments and other symbols.

“There’s one cross that’s upside down,” he said. “The reason it is on there is all of us get upside down with the cross from time to time, or maybe every day. Jesus forgave people on the cross – his tormentors. And we can’t even forgive the kid that was mean to us in the third grade. So we all suffer from that.”

There’s also symbolism in the various vines and roots in the artwork.

“I tried to present that it’s a living cross,” Solberg said. “So it’s not a dead artifact. It’s something living.”

The cross for the Stanley church includes the dates of American Lutheran’s 1906 founding and new church building in 1965, which is significant personally to Solberg.

“This cross is going to sit right where you walk in, in the narthex of the church. It’s where I, as a 15-year-old, poured concrete,” he said. “We had to give them a week or two in the summer when they were building that church.”

His sculptures also include a reproduction of the Leonardo da Vinci’s Last Supper using railroad spikes.

The Taube exhibit features some of Solberg’s latest works as well as some of his oldest. A few of the abstract pieces he made in high school in the 1960s are being made public for the first time.

“My dad taught me to weld with oxy acetylene gases,” he said. It didn’t take him long to sell his first piece, but it wasn’t until he started showing his art that he discovered there was a market for it.

“I always said you’re not an artist if you can’t sell it,” he said. “But now, later in life, I say that it doesn’t matter if you can sell it or not. If you’re doing art, it’s art, and that’s good enough.”

Solberg is known for his personalized art pieces, such as farm and ranch signage or sculptures representing professions or hobbies. A favorite piece shows a smiling worker emerging from a manhole. Solberg calls it a tribute to underground workers.

“They’re mining. They’re plumbing. They’re doing electrical work. They’re doing concrete work,” he said. “Nobody recognizes them so, to me, this is a thank you to people who dig in the dirt and make life livable for the rest of us.”

Another of his favorite pieces is called “Coffee” and it features a hand holding a coffee cup to a face. Welded in exquisite detail, the piece required considerable time and the crafting of some special tools to make it, Solberg said.

A member of the Dakota Cruisers Car Club, Solberg also donates trophies made of engine parts every year for the club’s fall finale. He’s donated sculptures to the Great Tomato Festival auction to support its local causes.

“As you get older and wiser, you kind of sift down what’s important in life. I like working in my shops,” he said. “I have so many ideas yet to work on.”

There’s times he lies awake at night with ideas hopping around in his head.

“I go through the whole building of the thing in my mind, and then sometime in the near future I get to execute on it and create it. Sometimes it takes a long time – like that cross at First Lutheran. I think there are between 400 and 500 hours in it, and you can’t do it steady. Sometimes you just have to walk away because it’s not working. You come back a week or two later and bang. You are ready to go again because you see the way forward,” he said.

Solberg said he tries to limit the number of repeat pieces he creates because it’s the creative process of designing something new that he thrives on.

“I’m always looking for some new way to express myself,” he said.

Thu Oct 8 , 2020
MEXICO CITY (Reuters) – There was no formal opening or personal interaction with fans. Instead, Gabriel Orozco, the Mexican artist with a continents-spanning perspective, promoted his new collage watercolors with a dramatic, screen-friendly teaser. Orozco created the several dozen works while in quarantine in Japan earlier this year, but he […] 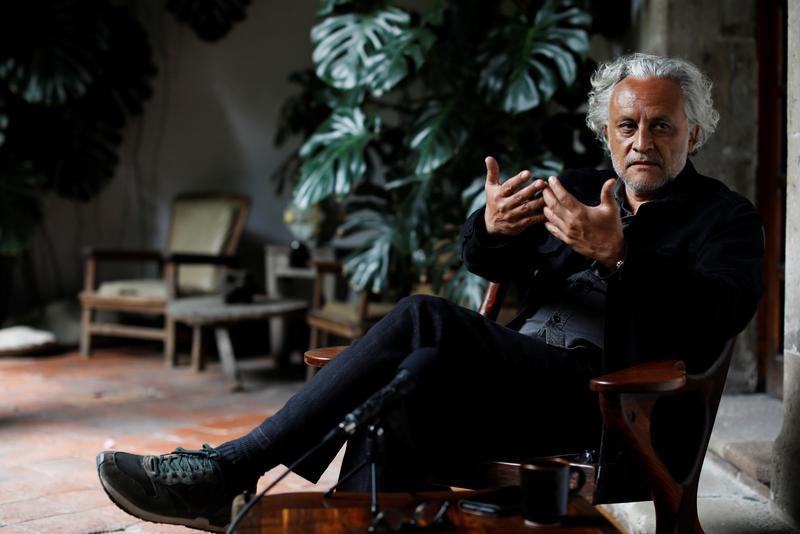