by Chloe Jung | 10/5/20 2:05am Source: Courtesy of Tricia Treacy Through class projects and hands-on learning, a new studio art class — SART 17.23, “Book Publication Lab” taught by professor Tricia Treacy — is seeking to create connections during remote learning. According to Treacy, the class, which is taught […]

According to Treacy, the class, which is taught remotely, takes an interdisciplinary approach to the research and creation of a variety of collaborative print projects, both digital and analog. Students learn about different techniques for page layout, typography and self-publishing.

Although she just joined Dartmouth as a professor this year, Treacy has been teaching printmaking, graphic design and digital imaging for 15 years at colleges including Appalachian State University and the University of Pennsylvania.

As a visiting professor of print media, Treacy decided to combine elements from her favorite courses to create SART 17.23. She said that she is excited to teach about book publication, noting that print can be used in combination with, or even as a vehicle for, a variety of other media forms. Treacy said this is due to its being less discipline-specific than other areas of art, such as graphic design.

The interdisciplinary nature of the class allows Treacy to work with students outside of the studio art major, something she believes is essential to exploring the conceptual questions about art and its role in communicating meaning. She also hopes that the class serves as an entry point into the studio arts field for students who may never have considered it.

From the first week of the term, students have been actively engaged in creating art, even from home. Jack Hardie ’21, a studio art major taking the course, described their first assignment —  manually stitching together their own sketchbooks with needle and thread.

Currently, students are in the design stage of their next project — a collaborative storybook. After independent brainstorming sessions, Treacy collected and redistributed individual story ideas, tasking each student with creating content based on one of their classmate’s visions. Theo Trefonides ’23 said that the concepts range from food to space to internet culture. Next week, the class will learn how to transfer these ideas into physical prints.

For their second project, the students will be creating a newspaper that will be sent to a company in the U.K. to have paper copies published. The newspaper will have original content and layout designed through the students’ shared creative process. Treacy said that she encourages her students to drive the conversations themselves, placing emphasis on the collaborative aspect of the course.

“There’s no real ownership,” Treacy said. “It’s our book. The whole class owns all the books. We’re all generating content. We’re all helping each other.”

Treacy intentionally titled the course a “lab” to emphasize its collaborative, hands-on nature. However, according to Treacy, working remotely has made it difficult for her to give demonstrations on how to work with different media. The class also lacks access to the Hood Museum, which she had hoped to use as a way to inspire her students and give insight into different artistic techniques.

Despite these limitations, Treacy has taken advantage of the virtual format to invite speakers and artists from around the world to join the class sessions. Guests have included Nathan Davis and Sarah Elawad — founder and assistant director, respectively, of the experimental printmaking studio Water with Water in Qatar, Jimmy Luu, a graphic designer and educator from Austin, Texas and Benjamin Hickethier, an artist and graphic designer from Norway.

Trefonides said that the course has made him think more critically about the role of different books and the ways they reach audiences and disseminate information. He noted that despite the convenience and accessibility that e-books offer, the course has strengthened his appreciation of printed books.

According to Treacy, the most important takeaway of her course is that students learn to listen to each other and work together.

“I think collaboration is a huge part of my creative practice, and I tend to think that students shy away from it,” Treacy said. “I’m hoping that through this course, these students will feel more comfortable working with each other.”

Trefonides agreed that the emphasis on collaboration has made him feel much closer to the people in his class. He said that Treacy has done well to create a comfortable atmosphere for sharing their work and ideas.

Hardie noted that the emphasis on collaboration has also challenged him as an artist.

“I wanted to break out of my boundaries and try a class that was oriented towards primarily group work to open my mind a little bit,” Hardie said. “I came into this class knowing I was going to have to work with people and sacrifice some of my ideas.”

Treacy added that she hopes students walk away from her class having a broader understanding of what a book is, particularly as a method of communication.

“I want them to really think about the book in an expansive way. That the book is an opportunity to communicate important topics,” Treacy said. “I’m really trying to open up the definition of a book and what a book can be, so that it can be more accessible to more people.”

Are Astronaut-Style Face Shields the Future of P.P.E.?

Mon Oct 5 , 2020
But what about airflow — and just how airtight are they? “For any mask or fancy filter, one thing we need to keep in mind is how well they fit, tightly, to the face,” said Chenyu Sun, an internist at Saint Joseph Hospital in Chicago who recently co-authored a study […] 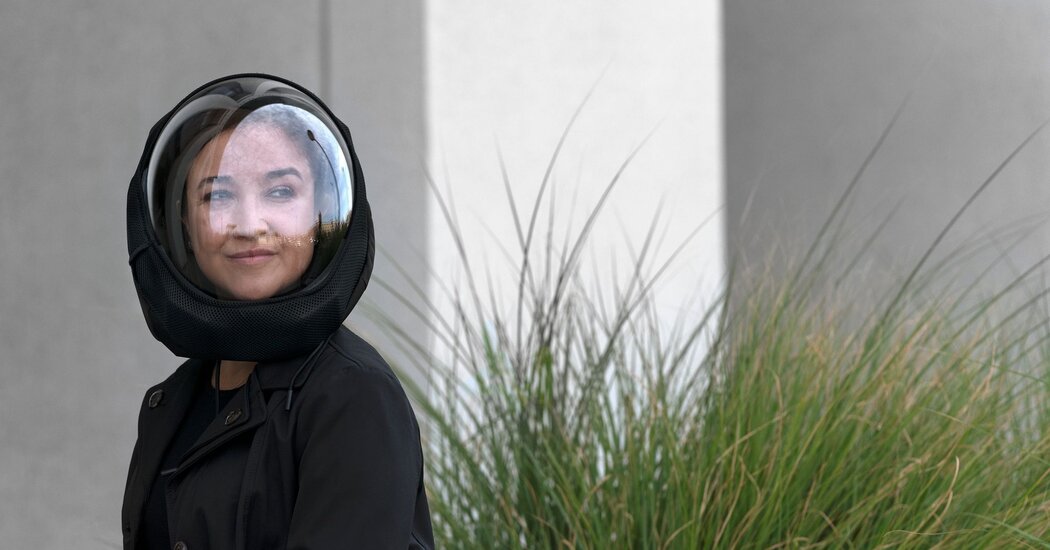