When historians look back at images of the British public in the summer of 2020 they will see grandparents hugging grandchildren through plastic sheets, livestreamed funerals and exhausted health workers. But they will also see many acts of kindness, including a Spider-Man in Stockport and people anxiously cutting their partner’s […]

When historians look back at images of the British public in the summer of 2020 they will see grandparents hugging grandchildren through plastic sheets, livestreamed funerals and exhausted health workers.

But they will also see many acts of kindness, including a Spider-Man in Stockport and people anxiously cutting their partner’s hair with dog clippers.

On Monday, the National Portrait Gallery will unveil a digital exhibition of 100 images capturing life under lockdown. They were selected from more than 31,000 submissions to the Hold Still community photography project, which was the idea of the gallery’s patron the Duchess of Cambridge.

Nicholas Cullinan, the gallery’s director, said the aim was to provide a portrait of Britain and a snapshot of the different experiences people have gone through, whether sad or heartwarming.

He said the number of submissions was extraordinary. “The other thing that is really lovely is that it is so democratic and so inclusive. These photographs have been submitted by so many members of the public all across the country, different backgrounds, and all ages from four to 75 years old. The breadth of it is really extraordinary.”

Cullinan hoped the project might provide “a sense of unity and an understanding of what we have all gone through”. In the future it will be seen as a fascinating historical record.

The 100 photographs are being displayed digitally, with a selection also due to be shown in towns and cities later in the year.

Cullinan said he had been particularly struck by the images of lockdown funerals. “We all read about people having to attend loved ones’ funerals over Zoom, but then seeing the images of that and hearing the stories behind it was incredibly moving,” he said.

An image in the selection shows a man in a suit and black tie sitting in his home in Cockermouth, Cumbria, watching the funeral service of his grandmother in Edinburgh. The service was attended by eight people.

It was not just the poignancy and dignity of the man, said Cullinan, “but you also realise he is doing that from what has become his desk, working from home in the way that all of our lives have been upended.

“We’ve all had to completely rethink our relationships with people, colleagues, family and friends, our daily routines … it really captures a lot, I think.”

Joe and Duke Brooks a week before their 18th birthday. The image was taken in May through the window of their flat in London. Photograph: Sarah Lee/The Guardian

The final 100 were chosen by a panel consisting of the duchess, Cullinan, the poet Lemn Sissay, England’s chief nursing officer Ruth May, and the photographer Maryam Wahid.

“Judging was a huge honour but also really difficult. I think we all had some sleepless nights,” said Cullinan.

The images convey many moments of sadness, anxiety and isolation but also cheery community spirit and good humour. These include the Stockport Spider-Men, two friends who dressed as the superhero while exercising to keep people’s spirits up and raise money for charity.

“We didn’t predetermine what should be in or what it should look like or the tone. We took our cues from what had been submitted,” said Cullinan.

Many of the photographs convey real drama, not least one taken by four-year-old Coni, from Cheltenham, who took a picture of her mother cutting her father’s hair with dog clippers.

Her mother, Kate Ainger, said: “We were too absorbed in the tension of the moment to realise she was taking it so the emotions are very real.”

Paris art fair to go ahead despite virus pandemic

Fri Sep 25 , 2020
PARIS — The coronavirus pandemic has led to the cancellation of this year’s premiere global art fairs since March, stymieing the main commercial artery of the multibillion-dollar industry. But Art Paris, which is France’s second-biggest contemporary art fair, is opening its doors to thousands of visitors from Thursday in the […] 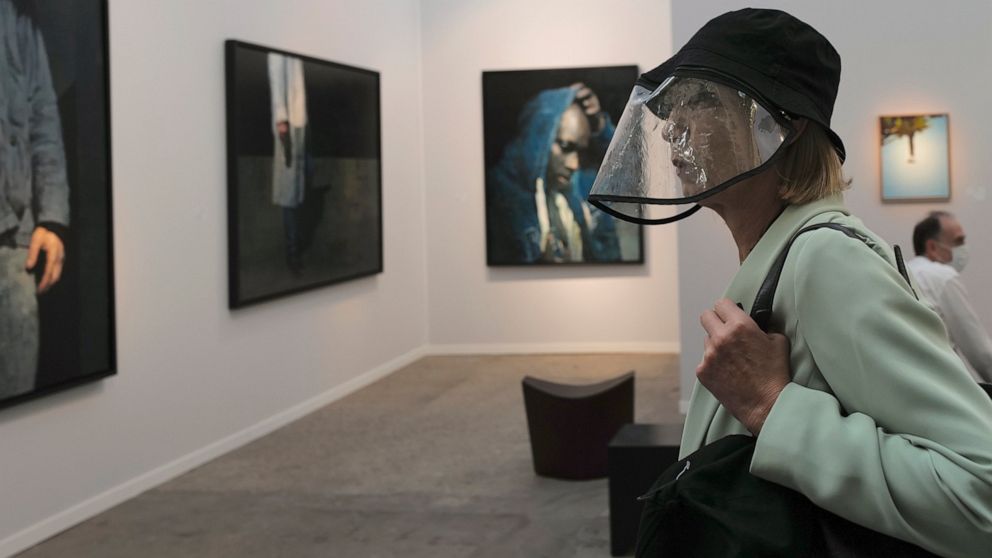