A STUNNING enhanced photograph of a shipwreck titled ‘SS Maheno Wreck’, has claimed the major prize in the 2020 CQU Creates Art Awards. It was satisfying reward for the hard work by first-time digital artist and CQU Mackay staff member Bill Jewell. The CQU Creates Art Awards is an annual […]

A STUNNING enhanced photograph of a shipwreck titled ‘SS Maheno Wreck’, has claimed the major prize in the 2020 CQU Creates Art Awards.

It was satisfying reward for the hard work by first-time digital artist and CQU Mackay staff member Bill Jewell.

The CQU Creates Art Awards is an annual visual arts prize and exhibition which aims to celebrate and encourage diverse modes of expression representative of contemporary art practice.

The competition accepts entries from current or past students or staff of CQUniversity and CQ TAFE.

This year’s 2020 theme was left open ended with artists give the opportunity to address a theme or subject matter of their choice in 2020.

Working as a campus assistant, and first aid officer at CQU’s Mackay City and Ooralea campuses, major prize winner Mr Jewell and said he was “over the moon” about his win.

“This is the first time I’ve ever won anything, or entered a competition.”

His photo of the wreck ‘SS Maheno’ was taken on a visit to Fraser Island late last year.

It was combined with a hinterland sunset photo and manipulated in Photoshop.

Bill has been working for CQU for a year after a 40-year career in paramilitary circles, working for two state police forces, St John Ambulance and a stint as a volunteer paramedic in remote Northern Australia.

He said the COVID-19 pandemic inspired him to take up digital photography and Photoshop.

“It’s something I’ve only just started learning. I’m totally just an amateur at it, but Photoshop really is an amazing program.

“Since I’ve been using it, I’ve even picked up additional work making posters to be put up around the campus.”

In addition to the major prize claimed by Mr Jewell, two other major prizes were also awarded.

“I’m pretty impressed to have won. I didn’t think I would win so I was very surprised,” Ms Rooney said.

“I’ve been painting since I left school, four or five years ago but this is the first time I’ve entered a competition.

“I want to finish my degree and maybe look into doing fine arts – art is a passion and I want to keep at it.”

Her painting, ‘Night Herons’, tells the story of how a small tribe, threatened by neighbours, changed into herons and hid in swamps, hunting only at night.

“I think the painting on its own says something, but I always like to paint to a story, and share my culture,” she said.

Ms Llewellyn praised the diversity of the works and artists in this year’s CQU Creates Art Awards and the efforts of Art Collection Manager Sue Smith.

“There were some really nice works and it was wonderful to see the diversity of both the artists and the artwork,” she said.

Although COVID-19 pandemic restrictions meant there was no formal ceremony and exhibition this year, the 2020 CQU Creates Awards were celebrated online, with Vice-Chancellor and President Professor Nick Klomp and CQU Art Collection Manager Sue Smith announcing the awards in a specially-made video.

A record 69 works by 85 current and past students and staff were received for this year’s awards and in addition to the three major awards, judge Cameron Curd (Gladstone Regional Art Gallery and Museum manager) also awarded eight artists with Highly Commended awards.

To watch the video presentation of the 2020 CQU Creates Art Awards and to view the online catalogue click here.

Mon Sep 28 , 2020
Whether you’re ready to mask up and head out to the galleries or prefer to check-in virtually, these 12 exhibitions have something for everybody Courtesy the artist and Patel Brown Gallery A composite image from Howie Tsui’s ongoing animation series, Parallax Chambers. Art shows in Toronto look a bit different […] 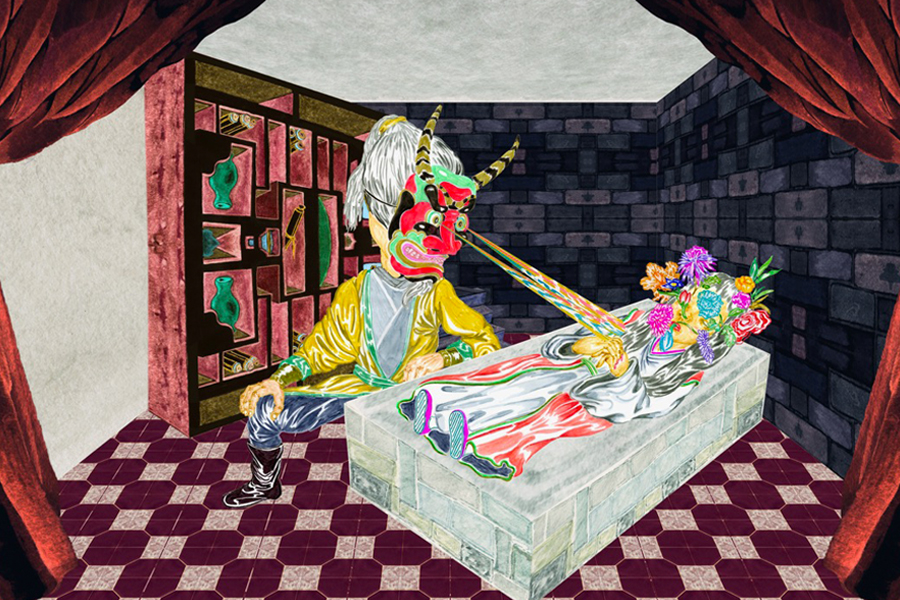