When your name is “Slater” and you live in Cocoa Beach, perfection is often expected.

The 49-year-old has embraced the nerve-wracking, artistic performances from her professional figure skating days and has encompassed that into the beauty of art, from kitchen cabinets to a huge 1,600-square-foot showcase in Port Canaveral’s new Port Terminal 3, yet to be opened to the public.

“I still get nervous (going skating), and it’s completely natural, but once you get into a groove and let it flow … even when you do art, it’s the same feeling,” April said. “I feel like it’s my chance to perform, my time to shine.”

The owner of Fauxnique Co., based on Merritt Island, has learned from the masters, across the country and the world. While she has skated for “Disney on Ice,” she’s also done artwork for “The Wizarding World of Harry Potter.”

And while perfection is her ultimate goal — she’s even “fired” her husband on two occasions — “Sometimes mistakes are great, and you end up with something you hadn’t even planned on,” she said.

She agrees that faux art (i.e., fake, imitation, artificial) once had a reputation for being just that.

“I think now, because it’s an art that’s been around, it seems, hundreds of years, it’s different. Yes,  in the beginning, when box stores had the DIY products and the homeowner could do it, it became trendy. But to learn how to re-create a specific marble or wood, that’s artistry.

“It sounds funny being (considered) a fake artist, but I know some amazing artists.”

School back in session

After giving birth to her son, Syrus Peters Jr., when she was 27, April earned her degree in early childhood education. Her first job was working with children up to sixth grade at Alpha Academy (now the Alpha Learning Center on Merritt Island).

“It’s a private school, so I’d be taking the kids to the ice rink (in Rockledge) with two other coaches, and we would do ice shows, like recitals,” she said.

Then she discovered a new skill.

“I learned that one of the parents who brought their kids to school did faux finishing, so I  found out where she had taken classes. So I went to classes (at the time in Vero Beach at Faux Effects International, which now is in Fort Pierce). And 14 years later, here I am,” she said, laughing.

“She’s been crushing it,” said Sean, her husband of 10 years who now is an able-bodied seaman on the deck of the Victory Casino Cruise Lines at Port Canaveral after a stint as a deep-sea fishing charter captain. “And she’s done it without advertising.”

Resin, wood, marble and painting are just some of the classes that have led to April’s mastery. And she’s always eager to add to her skills.

In February, she planned a trip to Chicago, where she’ll learn about new finishes on walls and ceilings, and then in June, she’ll travel to Spain to study high-end marble and high-end wood finishes.

“Going to Europe and staying in a castle and taking a class,” she said. “Another bucket list item, and I’m making it happen.”

“She takes her things seriously,” Sean said. “She’s fired me twice because I can’t paint inside the lines.”

“That, and the fact he sometimes drives me crazy,” April said, jokingly.

April Slater, a decorative finishing artist, painted a faux wood finish on the giant aluminum wagon wheels that are part of the decor in the new Cruise Terminal 3 at Port Canaveral. In the VIP Lounge, April worked with her crew who moved her around on a scaffold while putting a wood finish on the 1620 square foot wagon wheel. (Photo: , MALCOLM DENEMARK/FLORIDA TODAY)

Her biggest accolade came late last year when she was selected to do artwork for the spacious lobby of the new Port Terminal 3 at Port Canaveral, where Carnival Cruise Lines will eventually dock its new Mardi Gras ship after COVID-19 restrictions are lifted.

“That was an awesome opportunity,” April said. “What I was most proud of was being a local (artist) asked to participate in a big project like that, where sometimes they’ll bring in artists (from around the world).”

Naumann Nature Scapes Inc. in Cocoa did the scenic work and RDS Industrial in Cocoa (which sculpted the metal surfer on the side of the Cocoa Beach parking garage) built the aluminum beams.

“The main one in the VIP area looks like a huge wagon wheel, 10 feet high, 1,600 square feet of aluminum beams. I did an imitation wood, in a maple color, painted on glaze, and then ran a tool through it.

“What made it so interesting is, you can’t just paint aluminum. They wanted it to look like one continuous piece, so I had to make the seams disappear, first filler work, then you’re able to do a color work.”

To accomplish that, her crew of workers — which includes her brother, Patrick Green — had to pull April around on scaffolding, once the glaze was applied, so she could run the tool through the moist glaze and make it look like continuous wood grain.

“There was no stop-start,” she said.

It was her biggest accomplishment and she has received accolades from port officials.

It follows in a long line of her artisan projects that include decorative wall and ceiling finishes, Venetian plasters, high-end wallpaper-looking finishes, stencil work, decorative cabinets and refinished kitchens. At J&J Carpet on Merritt Island, she used peat moss to create an artistic finish on the north-side walls.

And she has done it all safely.

“We use water-based paint or wear respirators, so we’re not breathing in any fumes,” she said. “Safety first.”

Before her career as a decorative finishing artist, April Slater was a competitive and professional figure skater. Photo provided.  (Photo: MALCOLM DENEMARK/FLORIDA TODAY)

From skating to surfing

Last December, April and Sean spent a month in Hawaii, getting to watch Kelly compete at Pipeline, where the 11-time world champion scored his record 31st perfect ride.

So, does the name “Slater” help when it comes time to signing artwork contracts?

“Maybe at times,” she said. “Usually I get the job and then I’m asked, and they’ll be surprised. Sometimes I say yes, sometimes no, because they’ll be asking for autographs (or souvenirs). I think people will get curious if they know the name.

“But, really, I just think hard work and reputation go a long way.”

Being married to a former pro surfer and living a block from the beach, one would think she would enjoy tucking into a small tube or trying an aerial maneuver.

“I have surfed a couple times,” she said, preferring to take lessons from Lauren Holland at School of Surf in Cocoa Beach rather than from Sean. “I like tandem surfing because he does all the work.”

April’s rise to athletic fame came on the ice, learning to do double axels  and Salchows at the old Ice Skating Palace in Orlando and later at the Space Coast IcePlex in Rockledge. She earned a role in the spectacular “Disney on Ice Aladdin Show,” before giving birth to her son in 1997.

She then decided to return to competition, skating in the adult classification. In 2000, she finished third at nationals, and a year later she won the Masters Ladies Novice national title in Wilmington, Del., with a three-minute routine to Native American music.

“I was the first woman from Florida to win a national title,” said April, who grew up idolizing world-class skaters Elaine Zayak and Rosalynn Sumners.

“That’s an important part of my history, and partly why I like art, I guess. I’ve taught skating and put together ice shows, so I like to create.

Contact Grossman at 321-242-3676 or [email protected] Support our work by subscribing to FLORIDA TODAY.

Fri Oct 9 , 2020
The temporary closure of public facilities to minimise the spread of Covd-19 coronavirus earlier this year pushed galleries and art museums to bring their exhibitions online through virtual exhibitions. Now, with a new platform called Cultural Japan, you can actually curate your own exhibition of Japanese artworks and artefacts.  Photo: Cultural […] 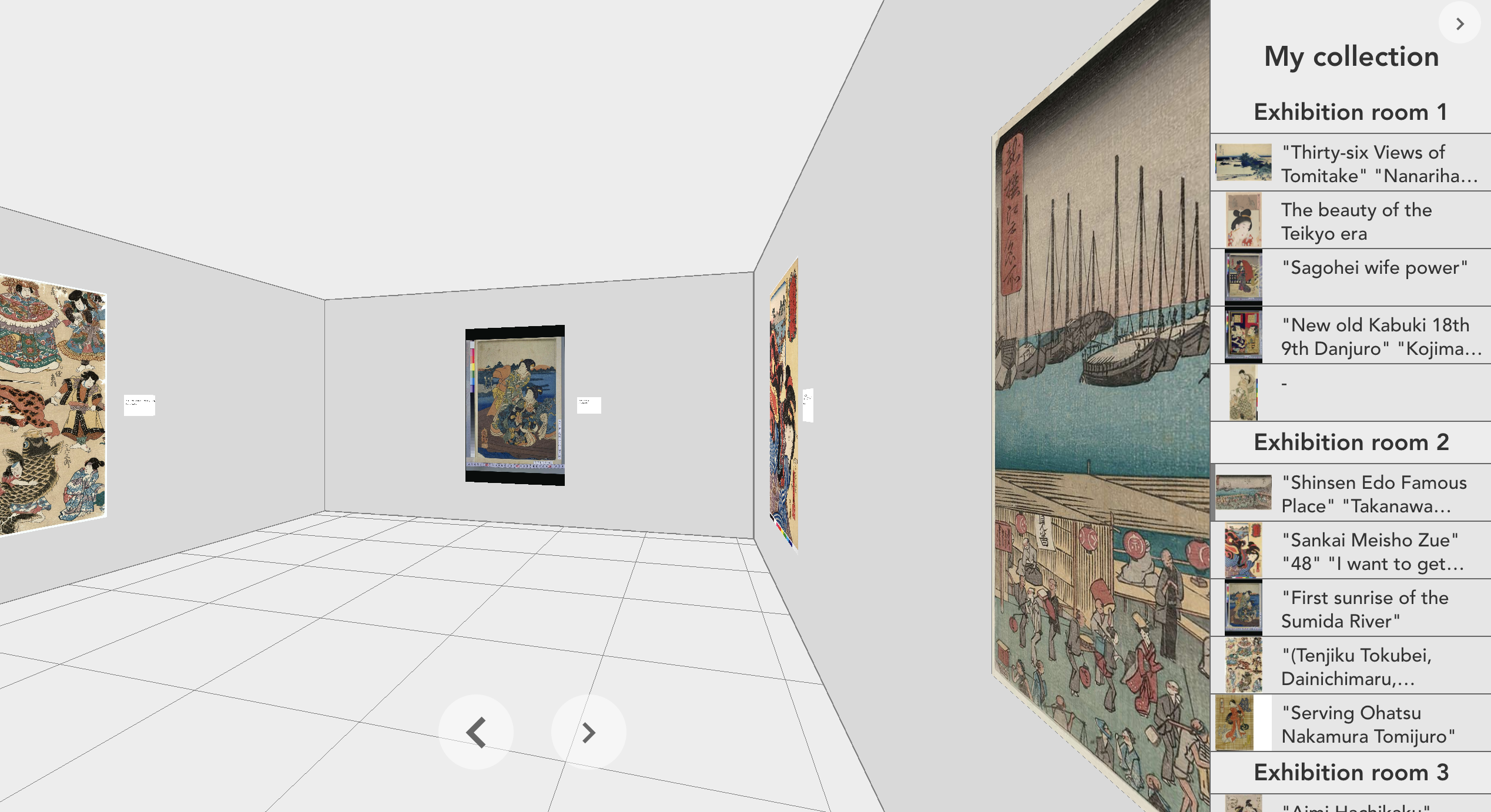