When theatre shut down in March, it was an open question when live performances could return. Modern technology and some fine summer weather allowed nimble-footed creators to adapt and present, but raising the curtain on a traditional stage remained elusive. But this Friday, Persistence Theatre brings “Offensive to Some” to […]

When theatre shut down in March, it was an open question when live performances could return. Modern technology and some fine summer weather allowed nimble-footed creators to adapt and present, but raising the curtain on a traditional stage remained elusive. But this Friday, Persistence Theatre brings “Offensive to Some” to the St. John’s Arts and Culture Centre.

“When theatres opened back up, we had to move quickly,” said producer Jenn Deon. “The Arts and Culture Centre is usually booked, and it just happened we had two shows ready to go.”

(“Offensive to Some” will be staged this Friday, Oct. 9, with Sharon King-Campbell’s play “Original” slated for Oct. 29.)

“We were just really lucky, to be at the right time in the right place with the right shows.”

Persistence is still not taking anything for granted. “What does the pandemic mean? Conditions could improve, they could devolve, we have to be flexible,” said Deon. “This was an opportunity and we jumped.”

“Offensive to Some,” by playwright Bernadine Ann Teraz Stapleton, debuted 25 years ago; this will be Miranda MacDonald’s third time performing it. MacDonald has a strong background in musical theatre; in fact she was cast via auditioning for a completely separate production, RCA’s “Rapunzel.” But “OTS” is pretty much the opposite of a musical.

One challenge of a one-actor show is there’s no one else on stage with you.

The material is intense. Stapleton was first inspired by the case of Catherine Mandeville Snow, the last woman hung in Newfoundland. She was convicted in 1834 for conspiring to murder her husband, after suffering at his hands throughout their marriage.

So, to prepare she researched, watched documentaries, interviewed law and legal officials, and screened fight scenes in movies, “to watch how people react after being hurt.” She wanted to know answers to questions like “Why don’t these women just leave?” She also employed her “wild imagination.”

In a final focus, at the 15-minute call (cueing the actor to curtain time) “I sit, by myself, in a dark room, on the floor.”

One challenge of a one-actor show is there’s no one else on stage with you.

“I love having someone to interact with. Now it’s always me that has to start the conversation. But I’m technically talking to people. The police, a talk show.”

Ruth Lawrence has directed MacDonald through each production and “three years later, very sadly, all the reasons why the play is so important, why it is so vital Persistence remount it, are all the same. I’m happy to be part of this but wish the play not necessary. Domestic violence —– I love how Berni addresses ‘domestic’ in the script — that physical, emotional violence is very sadly not at an end. The pandemic is only showing how more dangerous domestic violence is. People are cooped up in a dangerous situation.”

The pandemic also requires socially distanced directing. They work with four people in a room: MacDonald, Lawrence, an intern and a stage director. Lawrence, MacDonald said, always goes straight to her desk.

“Every time we revisit the script we find more, we dig deeper,” said Lawrence. They investigate: how can MacDonald be confident and strong, and at the same time embody the second-guessing that is a constant in an abusive relationship?

“Theatre is all action-oriented. With every line we ask, ‘What is the action?’ The play has nine scenes, and in some ways she is a different person each scene.”

The character is unnamed, meant by Stapleton to be “an everywoman,” and Lawrence was “looking for someone comfortable in their own skin and can do everything.”

When MacDonald had auditioned for “Rapunzel,” director Nicole Rousseau had not cast her but remained impressed by her skills. When Lawrence mentioned the “OTS” role to her, Rousseau immediately suggested MacDonald.

Lawrence and MacDonald arranged to meet in a coffeeshop, “and Miranda brought her daughter, and I could see how she interacted with kids, and I believe there is something in motherhood that brings out a sense of selflessness, that the world is not about you anymore, it’s about them.”

And, Lawrence said, they soon found their working processes meshed. As an actor, MacDonald, like Lawrence, “wants every single note. Let’s run it! We were a perfect match.”

MacDonald can’t wait to get back on stage. Lawrence did perform in the Trinity Pageant, which is conducted outdoors, with Rising Tide and also directed with that company over the summer so “kept her feet in the water,” but this will be her first post-COVID-19 gig inside a theatre.

And what will it feel like for the audience, Deon wondered. The St. John’s Arts and Culture Centre theatre has a capacity of 1,000, but there will be only 200 or 300 seats sold. And some of the expected components, like paper programs, aren’t allowed.

It’s strange but not unprecedented, Lawrence noted. Her theatre history classes studying performances during the plague now resonate with what Deon has dubbed “the now times.”

To book tickets, phone the box office (729-3900) between noon and 6 p.m. You can attend alone or as part of a bubble, and all hands will have to supply contact information. Tickets are $25, showtime is 8 p.m., and the running time is 70 minutes.

An art exhibit on an O.C. lawn displays signs for every failed U.S. presidential candidate

Thu Oct 8 , 2020
There are two campaign-like signs. One is in black-and-white and reads “Biden” and the other is in blue with “Trump” on it. Both signs are located at the Orange home of John Spiak, the Grand Central Art Center’s director, and will remain there until the Nov. 3 presidential election results […] 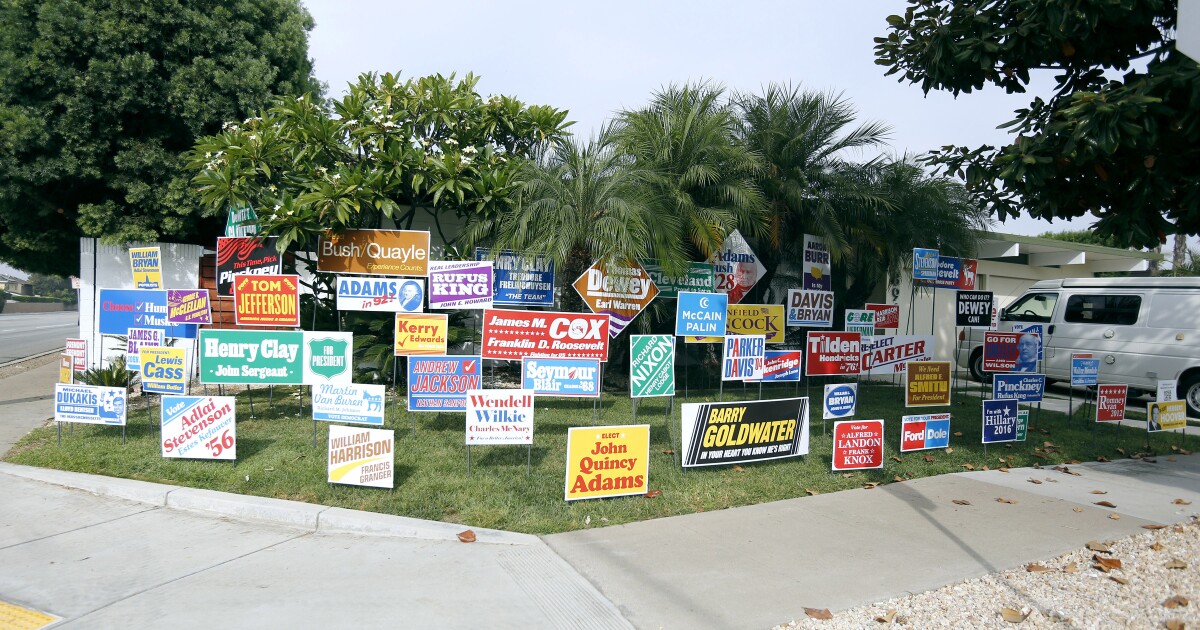