Use the interactive map to plot your next art destination. There are so many places to visit – from three-story murals in Salem and maritime sculptures in Marblehead, to the painted electrical boxes all around Somerville and Medford. Just start walking, and you’re bound to find something special.   Somerville/Medford […]

Use the interactive map to plot your next art destination.

There are so many places to visit – from three-story murals in Salem and maritime sculptures in Marblehead, to the painted electrical boxes all around Somerville and Medford. Just start walking, and you’re bound to find something special.

Somerville and Medford are home to a multitude of art installations in diverse mediums. Both communities are dotted with murals and memorials, but also host bigger projects. In Somerville, check out the photo exhibition wall in East Somerville and the recently completed Mother and Child sculpture carved into a dead tree on Marshall Street.

Jenkins also pointed to the Mystic Mural Project, which the SAC has been involved in for 22 years, and which employs Somerville youth to paint a mural along Mystic Avenue while learning about design and the environment. There are also festivals – like ArtBeat and Porchfest – which bring artists of all different ages, backgrounds, and skill together.

Medford and Somerville have both invited artists to beautify electrical boxes around town. In Medford, artist Amanda Garcia recently painted 10 boxes around town with messages of empowerment and justice (check the map for all of the locations).

“In this unprecedented time of isolation and polarization, public art can be used as a tool to inspire, unite, and spark important and necessary dialogue around social issues that affect the world and our relationship to it and each other,” said Mckay.

In Melrose, Lyman Whitiker created two kinetic wind sculptures for people to enjoy that change with the weather and are meditative to watch, according to Deb Corbett, a board member of Melrose Arts.

One of Whitiker’s wind sculptures is located on West Emerson Street at Cedar Park, while the other faces the gazebo by Ell Pond on Main Street.

Outside Melrose Public Library, atop a bench, sits a sculpture of a child reading a book. A blue mask now covers the boy’s face and nose – a new addition to the piece since the onset of the pandemic.

For anyone who wants to take in the serenity of Ell Pond, Lisa Tiemann fashioned a stone mosaic of turtles alongside two benches by the pond across from the Middle School.

Corbett said two future public art projects are in the works in the city that involve a huge mosaic and a wood sculpture.

Melrose Arts and the Chamber of Commerce are sponsoring a Window Art Walk on Oct. 3-18 that will feature the displays of local artists in the windows of downtown merchants.

Swampscott Arts Association President Ruth Rooks said there is a dearth of public art in the town as far as she can tell.

Rooks pointed to an enclosed signboard on the Kings Beach walkway near the Lynn line as one example of public art. The signboard features rotating illustrations.

Swampscott artist Ingrid Pichler suggested the granite signs at the entrances to beaches in town qualify as public art.

Pichler has been commissioned to complete public art installations at houses of worship in Marblehead and at other locations around the world. She cited the urban murals in cities such as Lynn and Salem as examples of successful public art undertakings locally.

Marblehead is home to literally dozens of artists and an amazing array of public art. There is the seal at Crocker Park, the drummer boy at Marblehead High School, the mosaic on the Village School, and the seagull statue outside the Boston Yacht Club. There is the Sun Circle at Preston Beach and people drive past the giant scallop shell on Riverhead Beach every day, but do they see it?

There are also dozens of pieces of public art that might take a little more work to seek out because they’re in public buildings. The most famous would be the Spirit of ‘76 by Archibald Willard that hangs in Abbot Hall. Others include the murals and friezes at the Veterans Middle School, the Peter Pan sculpture at Abbot Public Library, and an interactive mural artist Susan Schrader created at the Glover School, that makes room for students to add their own artistic touches.

Whether inside or out, those works are more obvious art. But what of the not so obvious? There is also the Historic District with architecture that reaches back to the 1600s, the gravestones in Old Burial Hill with their intricate carvings and symbolism like that of Susanna Jayne and more recently the painted Jersey barriers protecting the outdoor dining spaces that have sprouted up in the wake of the COVID-19 pandemic.

In Salem, there are literally hundreds of public art pieces and it’s not by accident. Salem has a public art master plan that seeks to build on the city’s long history of public art. From historic statues and old cemeteries to new murals and the controversial “Bewitched” statue at the corner of Washington and Essex streets, Salem has it all.

The statues of Roger Conant and Nathaniel Hawthorne watch over Brown Street and Hawthorne Boulevard respectively. There are the 12 “Ladies of Salem,” nautical figureheads created by local artists to commemorate Salem’s maritime past. Proctor’s Ledge Memorial, at 7 Pope St., is dedicated to the 19 people who were hanged during the Salem Witch Trials, and there’s the East India Square Fountain.

But perhaps the most recent public art installation is the North Shore Community Development Coalition’s 2017 project in the Point Neighborhood. Called the Punto Urban Art Museum, founders refer to its creation as a “social justice public art program.” It features more than 85 large-scale murals by 75 international and local artists.

As in other communities, there are also painted utility boxes scattered around the city, and viewers can try to guess who the eyes painted on the jersey barriers along Washington Street belong to.

Ipswich’s most famous piece of public art is a three-story mural on the back of the EBSCO building, 10 Estes St., near the Riverwalk. The mural, by Alan Pearsall, depicts events in the history of the town and looks out over the Ipswich River.

Ipswich ReCreation and Culture Director Kerrie Bates said there are several sculptures that people can view in the downtown area.

“American Dog” is a metal sculpture on the lawn at the Winthrop School, and “High Spirit” is a bronze tree on Town Hill just down from the library. If you look closely, you’ll see that the leaves on the tree are birds. Ipswich resident Rick Silverman commissioned the piece to honor his late wife Robin, who was an artist and worked to foster appreciation for the arts in town.

At Bialek Park on Linebrook Road, there is an undulating concrete surface that is used by skateboarders but is a piece of art in and of itself. Bates said the plan is to install platforms near there where artists can show their works.

“There will be an outdoor art gallery,” Bates said. “It’s a very engaging public art center.”

The Annual Ipswich Illumination, which runs in the fall and highlights music, dance, painting, sculpture and more, will be a bit different this year, Bates said. It will be a Season of Illumination and will run Sept. 25 through the end of October. It’s going to be a “constellation of public art,” she said, that is designed to keep people physically distanced, and it’s going to focus on the healing power of art during times of stress.

“It’s about playing at, not working at, art,” she said.

The city of Malden has a vibrant and growing public art scene that draws on local talent, including students, and the works of famous Malden-born musicians, painters and sculptors.

In addition to the painted switch boxes that can be found all over the city, Malden has 10 Little Free Libraries that are works of art, and there’s the ARTLine.

“It tries to follow the Bike-to-the-Sea path,” said Naomi Kahn, who serves on the board of Malden Arts. “It’s been a really fun community effort.”

The ARTLine is still growing, but it already boasts several sculptures and has revitalized park areas, Khan said.

The “Wonderful World of Ed Emberley Mural,” for instance, has brought renewed interest and activity to the David FitzGerald Park on Exchange Street. The mural, which honors the renowned children’s book illustrator who was born in Malden, was painted by local high school students under the supervision of art teachers and Malden Arts members.

“It was this totally unnoticed part of the park,” Khan said.

After the mural went up, people started gathering there, she said, and there is book storytelling for kids.

At the corner of Exchange and Washington streets in Malden, you can view the towering “Spirit in the Sky Mural” by artist Jesse Melanson. The mural depicts the 1969 iconic song that was written and performed by Norman Greenbaum, who was born at Malden Hospital and grew up in the city.

At Malden High School, on Route 60, there is the “Frank Stella Mural,” which honors the famous painter who was born in Malden.

Over at the Canal Street Art Hub at 195 Canal St. there is a sculpture of cyclists called “Malden Joyriders,” by Joe Malesky, and the “River of Ties Mural” by Clay Larsen.

Outdoor art has blossomed in Beverly in recent years.

Broderick is the dean of college relations at Montserrat College of Art. Many organizations and businesses in addition to the college have been instrumental in this growth, she said.

“A good part of that is because of the work of Beverly Main Streets,” Broderick said.

Beverly Mayor Mike Cahill has been very supportive of public art, and the city has a high concentration of people working in the creative economy, Broderick said.

As a result, the city is now blessed with many murals and sculptures. Recently, “Bass in the Grass” featured painted sculptures of bass displayed on the lawn at the Hale Farm. Coming up is the Main Streets “Sidewalk Poetry Project,” and if you’ve driven around the downtown recently, you’ve seen the painted Jersey barriers.

A powerful piece of art, Broderick said, is the bronze sculpture in Ellis Square at the Vietnam Veterans Memorial.

“Where the Golden Hanger [store] is,” Broderick said, “upstairs there used to be the draft office for Vietnam.”

The sculpture is of a young man, newly drafted, waiting for transportation to where he will start his service.

Thu Sep 24 , 2020
Good morning, and welcome to the U-T Arts & Culture Newsletter. I’m David L. Coddon, and here’s your guide to all things essential in San Diego’s arts and culture this week. Fictional portrayals of Abraham Lincoln tend to lionize the man. Understandably. The nation’s 16th president is arguably its greatest. […] 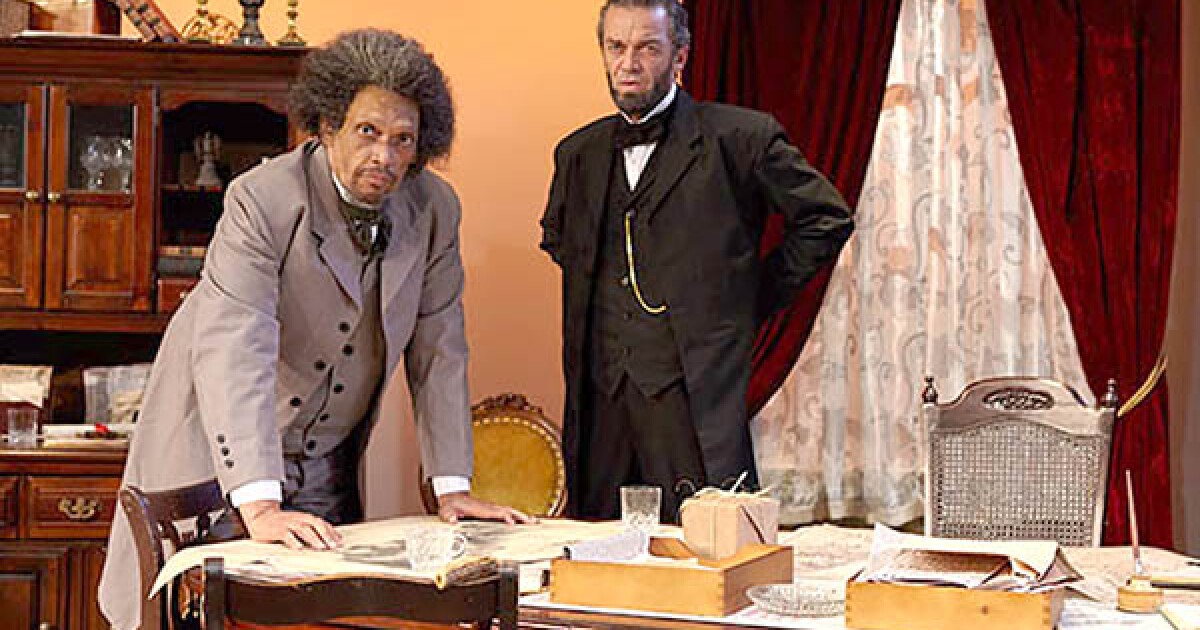